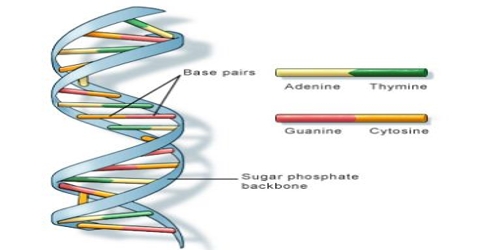 DNA (Deoxyribonucleic Acid) is the hereditary material in humans and almost all other organisms. Most DNA is located in the cell nucleus but a small amount of DNA can also be found in the mitochondria.

DNA is the genetic material and is responsible for the heredity & character of cell; DNA is present in the nucleus of cell. DNA is the most stable nucleus in the biological vk ork. DNA may he considered as immortal.

(i) It contains a pentose sugar deoxyribose In 1953, Watson and Crick proposed the double helix structure of DNA. They suggested that DNA consists of 2 polynucleotide chains round about a common axis to form a right handed double helix having a diameter of 20 A0 and a pitch of 3.4 nm. DNA double helix is stabilized by hydrogen bonding. Adenine (A) is paired with thymine through two hydrogen bonds. Guanine (G) is paired through three hydrogen bonds with cytosine. The four types of nitrogen bases are adenine (A), thymine (T), guanine (G) and cytosine (C). The order of these bases is what determines DNA’s instructions, or genetic code.

The most important functions DNA are-

Describe on Size of Atom