Home Physics Experiment: Refraction of a Plane Wavefront at a Plane Surface 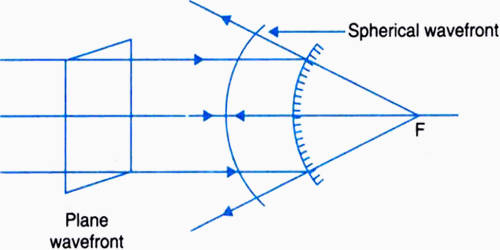 Refraction of a plane wavefront at a plane surface

Let XY be a plane refracting surface separating two media 1 and 2 of refractive indices μ1 and μ2 (Figure). The velocities of light in these two media are respectively c1 and c2. Consider a plane wavefront AB incident on the refracting surface at A. PA and QBC are perpendiculars drawn to AB at A and B respectively. Hence they represent incident rays. NAN1 is the normal drawn to the surface. The wavefront and the surface are perpendicular to the plane of the paper. 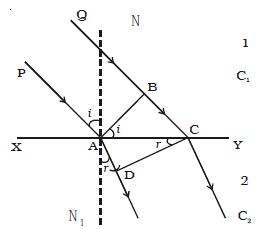 Fig: Refraction of a plane wavefront at the plane surface.

At any instant, the resultant displacement of a particle in the medium depends on the phase difference between the waves and is the algebraic sum of the displacement it would have at the same instant due to each separate set.

We know that when light travels from one transparent medium to another transparent medium its path changes. So the laws of refraction state that the angle of incidence is the angle between the incident ray and the normal and the angle of refraction is the angle between the refracted ray and the normal. According to Huygen’s principle each point on the wavefront act as the source of secondary wavelet. By the time, the secondary wavelets from B, reaches C, the secondary wavelets from the point A would travel a distance AD = C2t, where t is the time taken by the wavelets to travel the distance BC.

Explain Refraction of Light through a Prism

What is Real Image?