Bragg’s spectrometer method is one of the important methods for studying crystals using X-rays. The apparatus consists of an X-ray tube from which a narrow beam of X-rays is allowed to fall on the crystal mounted on a rotating table. The rotating table is provided with scale and vernier, from which the angle of incidence, θ can be measured. 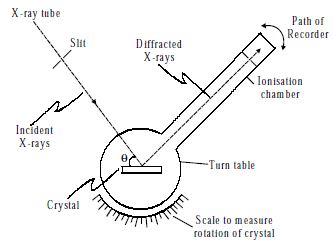 The first ionization spectrometer intended and constructed by William Henry Bragg in 1912-13, used to calculate variations in scattering angles of crystals in order to establish their structures.

Where; n is the order of reflection

λ is the wavelength of X-rays

d is the interplanar distance in the crystal

θ is the angle of reflection.

The principle of Bragg’s law is applied in the structure of instruments such as Bragg spectrometer, which is often used to study the structure of crystals and molecules. Bragg’s Law can simply be derived by considering the conditions obligatory to make the phases of the beams coincide when the incident angle equals and reflecting angle.

To obtain almost monochromatic x-rays, an x-ray tube is used to create characteristic x-rays. The Braggs used crystals in the reflection geometry to evaluate the intensity and wavelengths of X-rays (spectra) generated by different materials. Their apparatus for characterizing X-ray spectra was the Bragg spectrometer.

What is Point Defects in a Crystal?

What is Schottky Defects in a Crystal?