Consider a monochromatic plane EM wave incident on a plane boundary between two dielectric materials. Part of the wave is transmitted and part is reflected. Prom symmetry arguments, the reflected and transmitted rays must be in the same plane as the incident ray and the normal to the boundary. This plane is called the plane of incidence. Below Figure shows the ray geometry in the plane of incidence. 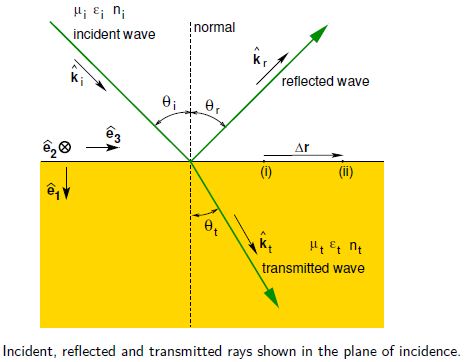 The electric and magnetic fields of the incident, reflected and transmitted waves are

For the boundary conditions to be satisfied at every point, e.g. simultaneously at points “(i)” and “(ii)” in above Figure,

Since ki = kr because the incident and reflected waves propagate in the same medium, we have

In general, the incident wave can be treated as a superposition of two linearly polarised waves whose planes of polarisation are orthogonal, with one wave polarised parallel to, and the other perpendicular to, the plane of incidence in Laws of Reflection. This is equivalent in quantum mechanics to the wave function being a superposition of eigenstates of the system.