James Maxwell (1870) was the first to give a comprehensive explanation about the interaction between the charged bodies and the behavior of electrical and magnetic fields on the macroscopic level. He suggested that when the electrically charged particle moves under acceleration, alternating electrical and magnetic fields are produced and transmitted. These fields are transmitted in the forms of waves called electromagnetic waves or electromagnetic radiation.

Light is the form of radiation known from early days and speculation about its nature dates back to remote ancient times. In earlier days (Newton) light was supposed to be made of particles (corpuscles). It was only in the 19th century when the wave nature of light was established.

Maxwell was again the first to reveal that light waves are associated with oscillating electric and magnetic character (Figure). Although electromagnetic wave motion is complex in nature, we will consider here only a few simple properties. 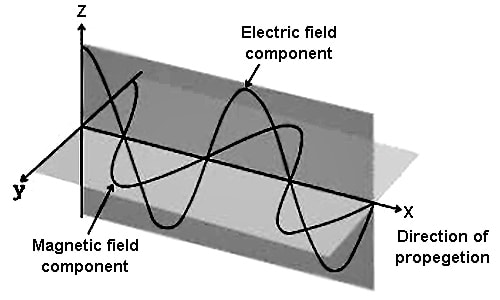 (ii) Unlike sound waves or water waves, electromagnetic waves do not require medium and can move in the vacuum.

(iii) It is now well established that there are many types of electromagnetic radiations, which differ from one another in wavelength (or frequency). These constitute what is called the electromagnetic spectrum.

The limitations of Bohr’s atomic model

Describe on Discovery of Protons and Neutrons