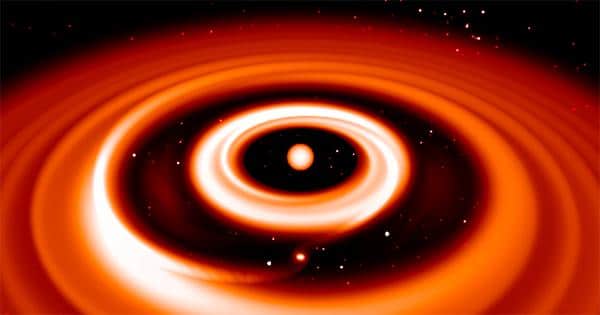 Two years ago, astronomers thought they had found the first evidence of a disk orbiting a planet that would eventually form the moon. A closer look reveals that they were wrong, but another planet in the same system actually has a disk that has now been spotted with surprising clarity. Explorations will lead to the formation of planets, as well as a better understanding of their moons. PDS 70 is a star about a million years old, about 370 light-years from us, with about three-quarters of the mass of the Sun. Two years ago, astronomers thought it was a Moon-forming disk in the vicinity of its largest planet, PDS 70B.

However, with large amounts of gas and dust still circulating around the system, it was difficult to distinguish the disk against the background, leaving the search uncertain. Of course, the images were not clear enough to know anything about the disk as to its size or mass. Dr. Miriam Benisty of the University of Grenoble found time for the Atacama Large Millimeter / Submillimeter Array (ALMA) to try to verify. In the astrophysical journal Letters, he reported tremendous success.

Benisty said in a statement, “Our ALMA observations were found at such an exciting resolution that we can clearly identify that the disk is planetary and we have been able to limit its size for the first time.” However, the disk he found was in the vicinity of a small planet PFS 70C – the suspected disk in the vicinity of PDS 70B appeared as a Maya. If you imagine a disk the size of Saturn’s ring or the outermost orbit of Jupiter’s larger moon, you’ll be gone. Instead, the disk has a radius of 86–180 million kilometers (about 53–12 million miles), 0.58–1.2 times the distance from the Earth to the Sun.

Benisty and co-authors speculate that it contains enough material to produce three moons in the shape of Earths. If the disk does not grow further, the PDS 70C will never coincide with Jupiter’s lunar eclipse.