Home Other Freedom of Press 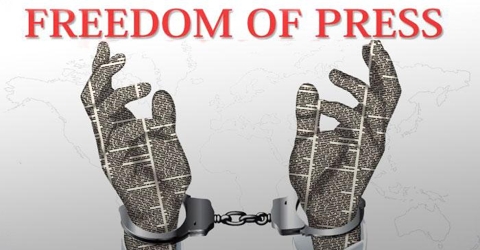 Press includes print media i.e. newspapers and magazines. Freedom of press denotes an atmosphere in which media-professionals like journalists, reporters, correspondents, editors and columnists can work and publish what is true and tact without fear or any threat. Freedom of press is an important precondition of a democratic and free society. In most countries of the world, freedom of press is guaranteed by the constitution.

As an important means of public media, newspaper holds and exerts immense influence on people. Freedom of press means newspapers can print news and views without being censored or barred by any authority. When press enjoys freedom it indicates that the press can publish news and opinion, on any issues without facing any restrictions or prohibitions. But it does not mean that this freedom is absolute and arbitrary. Newspaper cannot publish whatever they wish, rather they should publish things that are constructive for the society or the country and should refrain from publishing any propaganda or biased news and anything that can harm society or the state. So press mum realize the meaning and scope of its freedom otherwise their power can turn into an instrument of great public harm and damage

Necessity of freedom of press: Press is called the fourth pillar of a state. And newspapers are rightly called people’s parliament. Newspapers and journals give us current picture of life, of things happening every moment. Today right to information is considered one of the fundamental rights of a civilized society and free flow of information is also vital lot building a corruption free, accountable and transparent society. Newspapers or press serer people with providing information. Hence their freedom is necessary in order to keep people informed of the affairs going around. Otherwise people remain in the dark and in that case, confusion, corruption and abuse or power hold firm in the society.

Obstacles to its freedom: Realizing the far reaching impact of freedom of press and how it can pose a big challenge to abuses of power, corruption and monopoly or vested interests of any group, power-holders, despotic government, dishonest politicians or businessmen deny press of its freedom and whenever press becomes threat to their narrow party of personal interest, they attempt to stop its voice. So, an undemocratic society, a despotic or tyrannical ruler, monopolized corporate, or dishonest politicians all create obstacles to freedom of press because they see the freedom of press as destructive to their uninterrupted misdeeds and wickedness.

Reckless Driving in the Streets