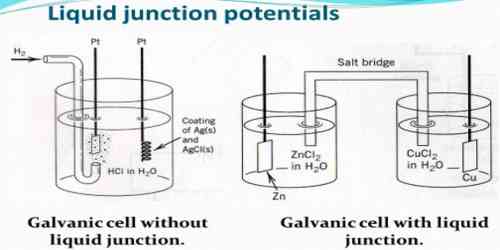 If in a cell two electrolytic solutions or two solutions of the same electrolyte but of different concentrations, are in contact then a potential difference is usually developed across the boundary between the two solutions. Such potential is called the liquid junction potential. This arises due to the unequal velocities of the ions in contact. Consider the boundary-

where c1 < c2 and the vertical line indicating that the liquids are in contact. The hydrogen ions and chloride ions tend to diffuse into the more dilute solution, but the H+ ions diffuse more rapidly than the Cl– ions. As a result the dilute solution becomes positively charged while the concentrated solution is negatively charged. This separation of charges gives rise to a potential difference across the boundary and slows down the faster moving ion and speeds up the slower moving ion. A steady state is eventually reached when the two ions migrate with the same speed.

For accurate measurements of potentials of cells liquid junction potential should be eliminated as far as practicable. The most convenient way of minimizing the junction potential is to use a salt bridge prepared with solution of saturated potassium chloride or ammonium nitrate or potassium nitrate set in agar jelly. As shown, a doubly bent tube is filled with the jelly containing the salts, the two ends of the tube being placed in two separate electrode vessels. This introduces two liquid junctions, but as the ion pairs given by the above mentioned salts have almost equal transport numbers and these ions are present in overwhelmingly large numbers at the boundaries the effect of the other ions tends to be swamped out. Of the three salts mentioned potassium chloride is to be preferred where this can be used.