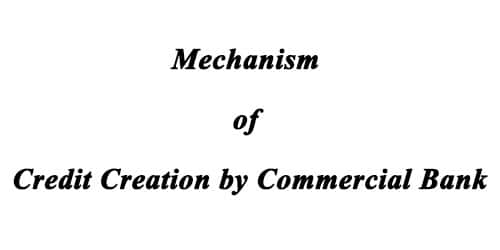 Where RR is the required cash reserves with banks, RRr is the required reserve ratio and D is the demand deposits of banks. To show that D depends on RR and RRr, divide both sides of the above equation by RRr;

Where 1/RRr, the reciprocal of the percentage reserve ratio, is called the deposit (or credit) expansion; the limits of the deposit expansion of a bank. The maximum amount of demand deposits which the banking system can support with any given amount of RR is by applying the multiplier to RR. Taking the initial change in the volume of deposits (DD) and in cash reserves (DRR), it follows from any given percentage of RRr that,

To understand it, suppose the RRr for the banks is fixed at 10 percent and the initial change in cash reserves is Rs 1000. By applying the above formula, the maximum increase in demand deposits will be –

The sum of the geometric progression within brackets gives:

The deposit expansion multiplier rests on the assumptions that banks lend out all their excess reserves and RRr remains constant.

Features of a Banker’s Right of General Lien