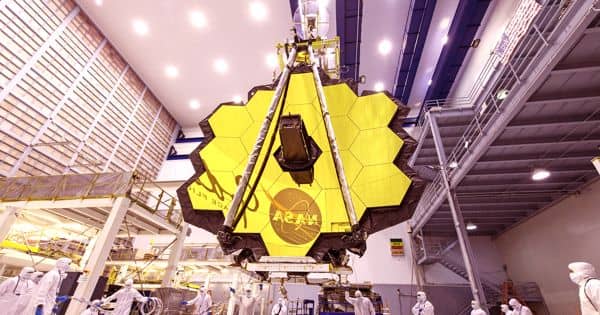 Two new studies led by Madeline Marshall from Australia’s University of Melbourne and the ARC Centre of Excellence in All Sky Astrophysics in 3 Dimensions find that the Webb will be able to reveal galaxies currently masked by powerful lights called quasars.

The papers are published in The Astrophysical Journal and the Monthly Notices of the Royal Astronomical Society and show that NASA’s James Webb Space Telescope, scheduled for launch late next year, will reveal hidden galaxies.

Simulations led by Science Ph.D. candidate, Madeline Marshall, show that while even NASA’s Hubble Space Telescope can’t see galaxies currently hidden by these quasars, the James Webb Telescope will be able to get past the glare.

Observing these objects is very difficult with the capabilities of current telescopes. Although quasars are known to reside at the centers of galaxies, it has been difficult to tell what those galaxies are like and how they compare to galaxies without quasars. The more distant a galaxy is, the more its light has been stretched to longer wavelengths by the expansion of the universe. As a result, ultraviolet light from the black hole’s accretion disk or the galaxy’s young stars gets shifted to infrared wavelengths.

The James Webb Space Telescope is an infrared observatory, designed to see this light from the distant universe. “Ultimately, Webb’s observations should provide new insights into these extreme systems,” said ASTRO 3D co-author Stuart Wythe of the University of Melbourne.

“The data it gathers will help us understand how a black hole could grow to weigh a billion times as much as our Sun in just a billion years. These big black holes shouldn’t exist so early because there hasn’t been enough time for them to grow so massive.”

The University of Melbourne team collaborated with researchers from the US, China, Germany, and The Netherlands to use the Hubble Space Telescope to try to observe these galaxies.

They then used a state-of-the-art computer simulation called BlueTides, which was developed by a team led by ASTRO 3D distinguished visitor, Tiziana Di Matteo, from Carnegie Mellon University in Pittsburgh, Pennsylvania, US.

“Its large cosmic volume and high spatial resolution enable us to study those rare quasar hosts on a statistical basis.”

The team used these tests to assess what the Webb cameras would see if the observatory were to research these remote structures. They noticed that it would be easy to differentiate the host galaxy from the quasar, but also difficult due to the limited scale of the galaxy in the sky.

They also observed that galaxies hosting quasars appeared to be smaller than normal, covering just around 1/30 of the Milky Way diameter, while having about as much mass as our galaxy. “The host galaxies are surprisingly tiny compared to the average galaxy at that point in time,” said Marshall.

Discovering the Truth about the Earth’s First Mass Extinction

An Astronaut Explains CPR in Space in the Following Way