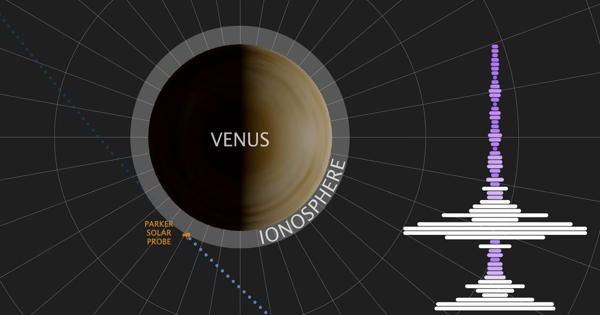 During a brief flyby of Venus, NASA’s Parker Solar Probe detected a natural radio signal indicating that the spacecraft had passed through the planet’s upper atmosphere. This was the first direct measurement of Venus’s atmosphere in nearly 30 years, and it looks very different from Venus in the past. A new study confirms that the upper atmosphere of Venus changes in perplexing ways over the course of a solar cycle, the Sun’s 11-year activity cycle. This is the latest piece of the puzzle that explains how and why Venus and Earth are so dissimilar.

Earth and Venus are twins, born of similar processes, both rocky and of similar size and structure. However, their paths diverged from the moment they were born. Venus lacks a magnetic field and its surface heats up to the point of melting lead. Spacecraft have only ever survived a few hours there. The study of Venus, despite its inhospitability, helps scientists understand how these twins evolved and what makes Earth-like planets habitable or not.

Parker Solar Probe made its third flyby of Venus on July 11, 2020. Each flyby is intended to use the planet’s gravity to propel the spacecraft ever closer to the Sun. The mission, which is managed by the Johns Hopkins Applied Physics Laboratory in Laurel, Maryland, made its closest flyby of Venus yet, passing just 517 miles (833 kilometers) above the surface.

A study confirms that Venus’ upper atmosphere undergoes puzzling changes over a solar cycle, the Sun’s 11-year activity cycle. This marks the latest clue to untangling how and why Venus and Earth are so different.

“I was just so excited to have new data from Venus,” said Glyn Collison, the lead scientist on the study, which was published today in Geophysical Research Letters by NASA’s Goddard Space Flight Center in Greenbelt, Maryland. Collinson, a Venus expert, has gone through all of the data from previous missions like NASA’s Pioneer Venus Orbiter and ESA’s (the European Space Agency) Venus Express several times.

FIELDS, named after the electric and magnetic fields it measures in the Sun’s atmosphere, is one of Parker Solar Probe’s instruments. FIELDS detected a natural, low-frequency radio signal for only seven minutes, when the Parker Solar Probe was closest to Venus. Collinson was drawn to the data’s thin frown. The signal’s shape and strength seemed familiar, but he couldn’t place it. “Then I woke up the next day,” he explained. “And I thought to myself, ‘Oh my God, I know what this is!'”

Collinson recognized the signal from his previous work on NASA’s Galileo orbiter, which explored Jupiter and its moons before being retired in 2003. When the spacecraft passed through the ionospheres of Jupiter’s moons, a similar frown appeared.

Venus, like Earth, has an electrically charged layer of gas at the upper edge of its atmosphere known as the ionosphere. This sea of charged gases, known as plasma, emits radio waves that can be detected by instruments such as FIELDS. Collinson and his team realized Parker Solar Probe had skimmed Venus’ upper atmosphere when they identified that signal, which was a pleasant surprise, though one they might have expected based on previous data, he said.

The radio emission was used by the researchers to calculate the density of the ionosphere that the Parker Solar Probe flew through. In 1992, researchers obtained direct measurements of Venus’ ionosphere from the Pioneer Venus Orbiter. The Sun was nearing solar maximum, the stormy peak of the solar cycle, at the time.

Data from ground-based telescopes in the years that followed suggested that significant changes were taking place as the Sun settled into its calm phase, solar minimum. While the majority of the atmosphere remained unchanged, the ionosphere—the uppermost layer where gases can escape to space—was much thinner during the solar minimum.

Without direct measurements, it was impossible to confirm.

The observations from the Parker Solar Probe’s recent flyby, which took place six months after the most recent solar minimum, confirm the mystery in Venus’ ionosphere. Indeed, Venus’ ionosphere is much thinner than previously measured during solar maximum.

“When multiple missions confirm the same result, one after the other, it gives you a lot of confidence that the thinning is real,” said Robin Ramstad, a study co-author and post-doctoral researcher at the University of Colorado, Boulder’s Laboratory of Atmospheric and Space Physics.

This study took over 30 years to complete. It took a mission to Venus and then, decades later, a cutting-edge mission to the Sun. “The goal of flying by Venus is to slow the spacecraft down so that the Parker Solar Probe can dive closer to the Sun,” explained Nour E. Raouafi, Parker Solar Probe project scientist at the Applied Physics Laboratory. “However, we would not pass up the opportunity to collect scientific data and provide unique insights into a mysterious planet like Venus.”

Collinson compared the study to hitchhiking. Scientists on Venus were eager to capitalize on the Parker Solar Probe’s flyby for new data and views of Earth’s twin planet. “It’s all about these little glimpses now to see Venus,” he explained.

BepiColombo Is Finally Meeting Mercury for the First Time