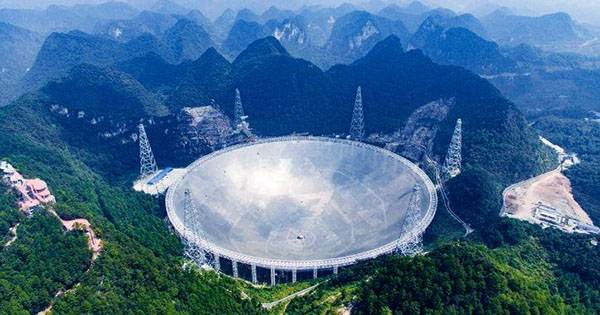 The most famous of all fast radio bursts, FRB 121102, has only added to the mystery surrounding these cosmic explosions. FRBs are unexplained radio wave emissions that unleash the energy produced by the Sun over many months in a fraction of a second. FRB 121102, on the other hand, is unique. It was the first one to discover to repeat itself, and the first to lead us to its source. It is now the first to be caught releasing over 1,600 bursts in just 47 days, the most FRBs ever released. Although magnetars (a type of neutron star) are a strong contender, we still do not know what produces FRBs. Because most FRBs only flare once, it is difficult to track them down. Some, such as FRB 121102, have observed to reoccur on a regular cycle, making it easy to forecast when they will occur and detect them.

Radio astronomers have discovered that FRB 121102 has a cycle of around 157 days, during which FRBs emitted for 90 days and then not emitted for the remaining 67. The system caught 1,652 detections during the course of 47 active days, according to new findings published in Nature. These findings help us comprehend these strange events better, especially when it comes to determining the duration between each burst, but they also show that we still do not know much about them and are likely a long way from figuring them out.

When the system is in an active season, the bursts do not have a set pattern – they are irregular – and the energy peak is roughly 4.8×1030 Joules. That is more than twice the energy required to drag Mercury away from the Sun, and it is all unleashed in a fraction of a second. The total energy released by all of the bursts is approximately 6.41039 Joules. In just 47 days, the Sun has unleashed the same amount of energy as it has in 530,000 years.

The authors of the current study believe that these FRBs are unlikely to emanate from a single compact object, such as a magnetar, because they lack a fixed periodicity and have such a large energy budget. According to the calculation, over 40% of the magnetar’s energy would be used to create these massive events. “The total energy of this burst set already adds up to 38% of what is available from a magnetar, and no periodicity was discovered between 1 ms and 1,000 s,” co-author Dr. Pei Wang stated in a release.

The observations were made with FAST, the Five-hundred-meter Aperture Spherical radio Telescope, between August 29 and October 29, 2019. This is the world’s largest single-dish telescope, and it has already identified a substantial number of FRBs. Professor Di LI, the paper’s lead author, remarked, “As the world’s largest antenna, FAST’s sensitivity shows to be conducive to revealing complexities of cosmic transients, including FRBs.” FRB 121102 was a pivotal discovery in the enigmatic realm of fast-radio bursts, and it continues to demonstrate how little we know about these phenomena.