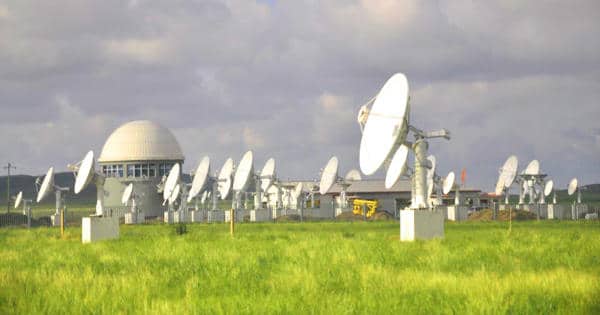 Radio astronomy is a critical component of astronomical observations. It accounts for approximately 65 percent of all observations made of our universe. Radio astronomy has yielded numerous significant discoveries, including the cosmic microwave background, dark matter, quasars, pulsars, and the detection of black holes. Radio waves are unaffected by stellar dust because of their long wavelengths, allowing us to see the most distant objects and even peer through the dust of galaxies to see their inner structure.

Prof. Yan Yihua and his research team from the Chinese Academy of Sciences’ National Astronomical Observatories (NAOC) recently published detailed results of observations by the new generation solar radio telescope—Mingantu Spectral Radio Heliograph (MUSER)—from 2014 to 2019. On March 29, the study was published in Frontiers in Astronomy and Space Sciences. It could help us understand the fundamental nature of solar eruptions.

Mingantu Spectral Radioheliograph (MUSER) is a key instrument supported by the Chinese National Major Scientific Equipment R&D Project. It is a new generation solar-dedicated telescope and will play an important role in solar physics, space weather prediction, and even space missions.

Solar radio bursts are linked to a variety of powerful eruptions, including solar flares, coronal mass ejections, and a variety of thermal and nonthermal processes. They are early warning signs of potentially disastrous space weather events.

Solar radio observations, particularly at centimeter and decimeter wavelengths, are crucial in revealing the fundamental physics underlying primary energy release, particle acceleration, and transportation. They also aid in the identification of critical precursors of solar storms.

MUSER, the world’s most powerful solar radio telescope, is made up of 100 antennas spread across three spiral-shaped arms with a maximum baseline length of 3 km on grassland in Inner Mongolia.

MUSER is a one-of-a-kind, powerful tool for measuring solar magnetic fields and tracing the dynamic evolution of energetic electrons over a wide frequency range, allowing scientists to better understand the origins of various solar activities and the fundamental drivers of space weather.

Radio emission studies from the Sun are particularly important because they provide insight into the structure of solar flares. Solar flares can have an impact on our infrastructure on Earth. They have been linked to widespread blackouts as well as satellite and GPS malfunctions. Solar activity has also been linked to our climate and has the potential to have a significant impact on our atmosphere.

Scientists can capture the most sensitive radio signals of even the smallest solar eruptive events using MUSER. Images of solar magnetic fields from the chromosphere to the higher corona are also produced by the observations.

“With the addition of metric and decametric wavelengths, MUSER will serve as a new generation radio heliograph. It will become the world’s leading solar-dedicated radio facility for solar physics and space weather research “Prof. Yan, NAOC’s chief scientist of solar physics and the study’s first author, explained.

The Chinese Spectral Radioheliograph (CSRH) was built between 2009 and 2016 at the Mingantu Observing Station, National Astronomical Observatories, Chinese Academy of Sciences in Zhengxiangbaiqi, Inner Mongolia, China. After its successful completion, the CSRH is renamed MingantU SpEctral Radioheliograph (MUSER).

MUSER is a solar-powered radio interferometric array comprised of 100 parabolic antennas. Calibration of the entire system, including amplitude and phase calibration, is extremely difficult. Among them, phase closure is one of the most critical procedures in the entire system. MUSER currently consists of two arrays spread across three spiral-shaped arms. The maximum baseline length in both east-west and north-south directions is 3 km.