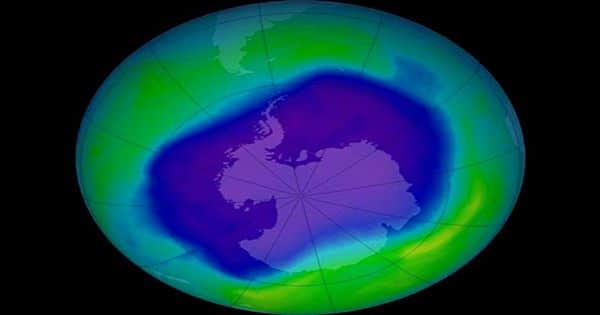 According to the Copernicus Atmosphere Monitoring Service, the hole that appears in Earth’s ozone layer every year is particularly huge this year, occupying an area greater than Antarctica (CAMS).

Researchers at CAMS discovered that the hole in the ozone layer over the South Pole has risen significantly in the last fortnight after a sluggish start to the season, and is currently larger than 75 percent of ozone holes at this time of year since 1979, based on satellite and in situ studies.

The ozone layer is a stratospheric region between 15 and 30 kilometers (9.3 to 18.6 miles) above Earth’s surface that contains a high concentration of the gas ozone compared to other parts of the atmosphere. The layer acts as an unseen screen for our planet, absorbing much of the Sun’s dangerous UV rays. After being swept up into the stratosphere, chlorofluorocarbons (CFCs) – human-made compounds once commonly utilized in aerosol sprays, solvents, and as refrigerants — damage this layer. The Montreal Protocol has mandated that the synthesis of such chemicals be phased out due to their ozone-depleting potential (a bit more on that later).

Although ozone holes may conjure up images of environmental calamity, the hole is not always a symptom of our planet’s situation. The magnitude of the ozone hole above the South Pole naturally varies with the seasons. CFCs break down ozone over the Antarctic each year around September, as the Southern Hemisphere transitions to spring, causing the ozone layer to break down and shrink.

Another large ozone hole occurred last year, owing to a powerful cold polar vortex that kept Earth’s stratosphere unusually cold. It’s unclear why this year’s hole is so enormous, but researchers believe it will follow a similar trend to that of 2020.

“At the start of the season this year, the ozone hole grew as expected. In a statement, Vincent-Henri Peuch, Director of the CAMS, stated, “It seems quite comparable to last year’s, which wasn’t really extraordinary until early September, but then transformed into one of the largest and longest-lasting ozone holes in our data record later in the season.” “According to our projections, this year’s hole has grown to be larger than typical. Because the vortex is quite stable and stratospheric temperatures are even lower than last year, it may increase slightly during the next two or three weeks.”

The situation was quickly addressed in a rare instance of worldwide cooperation. In 1987, the Montreal Protocol was signed, resulting in a global agreement to protect the ozone layer by phasing out ozone-depleting compounds. To date, it is the only United Nations pact that has been ratified by every country on the planet.