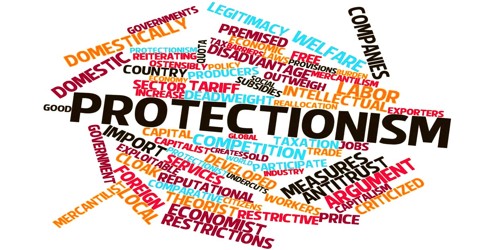 Protectionism is the action taken by a government to prevent imports and save the domestic product. It is the practice of protecting a country’s home industries from overseas competition by taxing imports. The general types of protectionism measures are tariffs, import quotas, and subsidies to home producers.

Protectionism is policies that create a divergence between the relative prices of commodities of domestic consumers and producers and their relative prices in the world market – H.G. Johnson.

Protectionism is essential for mostly developing countries. It represents an attempt to impose restrictions on trade in goods and services. There are several ways for creating protectionism some of them are discussed below.

Tariff is a kind of tax that is imposed on goods and products which are imported or exported between countries. Free trade can be controlled by imposing a high tariff. Tariffs raise the cost of imported goods in the home market, which, accordingly, decrease the demand for them.

The mechanism which determines how much goods or commodity should export or import in terms of their physical/monetary value in a certain period of time is known as a quota. A restriction on the supply causes an increase in the prices of imported goods, reducing the demand in the domestic market.

It decreases to import product. Because import license is limited and not so much easy to collect. In this case, governments grant importers the license to import goods – these can be limited.

Import goods and services from other countries can be controlled by controlling the exchange rate. The government uses this method to their control import and export. This form of protectionism involves limiting currencies that can move between countries.

A government can collect their necessary products for their defense, health and other sectors from the domestic market rather than a foreign market.

It decreases the demand for the foreign product by increasing product price. As a result, the domestic industries get good opportunities to build up.

Governmental and nongovernmental organization of a country can establish various industries without accepting free trade opportunity.

The government of a country might necessitate all overseas products to remain to definite guidelines. For instance, the UK Government might demand that all imported shoes include a certain quantity of leather.

A subsidy is another good option to encourage and increases domestically. They are negative taxes that are given to domestic producers by the government. Governments can facilitate home businesses to struggle by providing subsidies, which lower the cost of manufacture and allow the production of profits at lower price levels.

The Government of the country can protect their domestic industries and creates employment opportunities by using these methods.