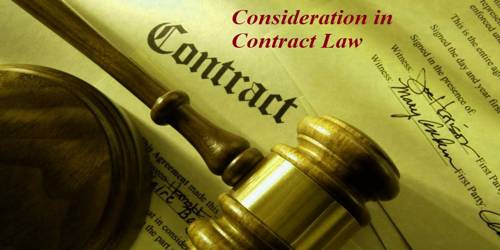 In Eastwood v Kenyon, the guardian of a young girl raised a loan to educate the girl and to improve her marriage prospects. After her marriage, her husband promised to pay off the boat it was held that the guardian could not enforce the promise as taking out the loan to raise and educate the girl was past consideration because it was completed before the husband promised to repay it.

Furthermore, where a contract exists between two parties and one party, subsequent to formation, promises to confer an additional benefit on the other party to the contract, that promise is not binding because the promisee’s consideration, which is his entry into the original contract, had already been Completed (or “used”) at the time the next promise is made.

In Roscorla v Thomas, Roscorla and Thomas contracted to buy a horse for $30. After the sale, Thomas promised Roscorla that the horse was sound; the horse turned out to be vicious. It was held that Roscorla could not enforce the promise, as the consideration given for entering into the contract to buy the horse had been completed by the time the promise was made; in a sense, the consideration was “used up”.

The actual promise made, if Made before the promisee provided the consideration, must be capable of being enforced, in other words giving rise to a legally binding contract.

How is the office of directors vacated?