You are here: Home Physics State and Prove the Perpendicular Axis Theorem 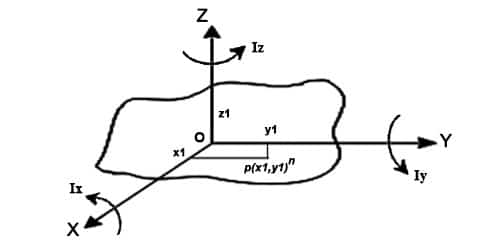 and their positions are at the distances r1, r2, ……rn respectively from the origin O.
For simplicity, let a particle of mass m1, is at point P (x1, y1) and its position is denoted by r1.

The moment of inertia of the particle of mass m, about OZ axis is,

This theorem is most useful when considering a body which is of a regular form (symmetrical) about two out of the three axes. If the moment of inertia about these axes is known then what about the third axis may be calculated. The utility of this theorem goes beyond that of calculating moments of strictly planar objects. It is a valuable tool in the building up of the moments of inertia of three-dimensional objects such as cylinders by breaking them up into planar disks and summing the moments of inertia of the composite disks.