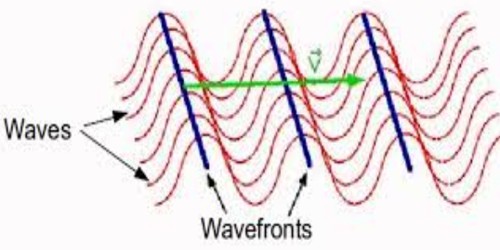 We know, disturbance in a medium is created due to the combined vibration of different particles of the medium. For example – waves are created in a pond when a stone is thrown on calm water which travels in all directions from the origin. Anyone of the following definitions can be given for the wave front –

(a) The plane in which particles of a wave having same phase of oscillation remain is called the wave front of the generated wave.

(b) The locus of particles of a wave in an isotropic medium having the same phase of oscillation is called the wave front.

So, the continuous locus of points having the same phase of vibration in a medium through which a wave propagates is called a wave front. 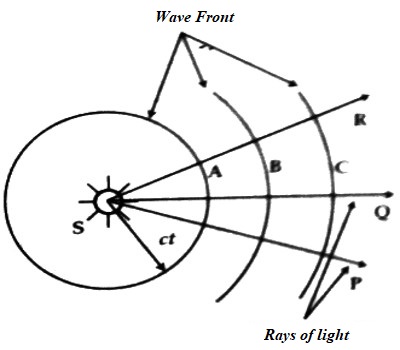 Explanation: Suppose ‘S’ is an exceedingly small source of light in an isotropic medium. The transverse waves produced due to the oscillation of particles of the source will spread all over the medium. If the velocity of light is ‘c’, then at time ‘t’ second, the wave will travel a distance ‘ct’ from the source S in all directions Now, if a sphere is drawn taking ‘S’ as the centre and ‘ct’ as the radius, then all the points on the surface of the sphere will have same phase. The surface of the sphere will indicate the location of particles having the same phase. So, at that instant, the spherical surface of the sphere is the wave front of the light.

Hence A is the wave front. With the lapse of time, light wave advances forward and wave fronts also will be found in newer and newer positions. In figure, B and C are the new positions of wave fronts at time t1 and t2 respectively. Lines SP, SQ, SR etc drawn normal to the wave fronts represent the direction of transmission of light. These are called rays of light.sub