Home Other Poet I like Most – Poet Kazi Nazrul Islam 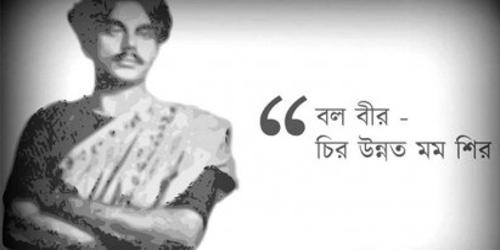 Kazi Nazrul Islam popularly known as the “rebel poet” is my favorite poet. He was born in 1899 on the 11th Jaistha in the village Churulia of Bardwan in West Bengal. At an early age, he lost his father. After the death of his father, he had to face hardship. He got his religious education in the village Maktab. But he did not like the hard and fast rules of the school. His poetry has a great charm for me. My heart dances and blood stimulates when I read his poems.

He did not get a good chance of regular education. He was a restless child by nature. The school education had no charm for him. Later on, he joined the ‘Letto’ Party of the village which delivered folk songs to the villagers for their entertainment. He composed various kinds of folk songs for the ‘Letto Party.’ He became the leader of the party and earned name and fame. I like to recite some of the most famous lines of his poems, Nazrul’s poems give me hope and courage at the time of my despair.

At the age of twelve, he fled away from home to Asansol. He worked in a baker’s shop. He worked for the whole day and studied at dead of night. One day a Muslim Sub-Inspector named Rafiullah was charmed at his merit. He brought him to his house in the village. Then the Poet Nazrul got himself admitted into a High School there. He stayed there for only three years. Then the First World War broke out. Nazrul joined the British army to take part in the war. But he continued his practice of writing poems and other literary works. He wrote many poems and stories. His “Boundeler Atma Katha” or the autobiography of a vagabond created a sensation. It was a writer of a new style in Bengali literature. People were fascinated by his style and quality.

Nazrul’s most remarkable work “Bidrohi” was first published in a weekly magazine named “Bijli’. At the age of 22, he edited the bi-weekly magazine “Dhumketu” or the Comet. Many famous and revolutionary poems of Nazrul were published in this magazine. He was put into jail for writing the poem “Agnibina.” But he did not stop writing. He went on a hunger strike in Jail. Then Poet Tagore sent him a letter in Jail saying, “Give up the hunger strike, Bengali literature claims you.”

He wrote prose entitled, “Rajbandir Zaban Bandi” which was full of protest, yearning for freedom, protest against injustice, and oppression of the British rulers. One of his verses named “Anandamoyeer Agamaneye” created a sensational impact among the people. The British Govt. at last proscribed the poem.

He composed Agni Bina, Bisher Bashi, Bhangar gan, Dolonchapa, Chakrabak, Fanimanasha, Sharbahara, Shamyabadi, and all the books were full of vigor, the inspiration for freedom, love for humanity and love for nature. He composed a few thousands of songs and Ghazals in Bangla. He used so many vocabularies efficiently from Arabic and Persia in Bengali literature. His literary works will remain a source of inspiration for the oppressed forever. For his outstanding contribution to Bengali literature, I like him the most.

Nazrul was at the same time a poet, a musician, a novelist, a story writer, and a dramatist. He tried to earn his livelihood by writings. But he had to experience hardship throughout his whole life. Suddenly he was attacked with an incurable disease and was paralyzed. He was brought to Dhaka from Calcutta after the independence of Bangladesh. He suffered for a long time and at last, he died on the 26th August 1976 in Dhaka.

Poet Nazrul Islam is greatly honored as the national poet of Bangladesh in 1972. He was buried on the premises of Dhaka University mosque with due honor offered by the state. His poems and songs inspired us during our Liberation War. He was declared our national poet. Nazrul was gifted with extraordinary talent. He inspired the people of the Indo-Pak subcontinent to stand against the British rule. He was always sympathetic towards the neglected, oppressed, and downtrodden people. He was a champion of freedom, justice, and equality. His literary works will never die.