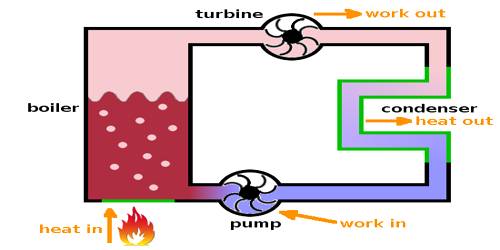 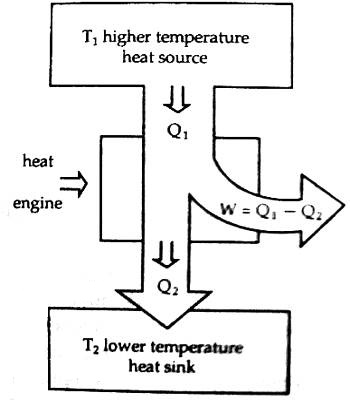 According to figure, the working substance receives Q amount of heat from the source at temperature T. This engine does work by a portion of heat in energy into mechanical energy and some position of heat is rejected into the heat sink and becomes cold so that the engine can receive heat again from the source. If the amount of heat rejected in the heat sink is Q2 at temperature T2, the amount of heat used for transforming into work is, W = Q1 – Q2. The engine which can convert a larger portion of heat energy into work has higher efficiency. A petrol engine has higher efficiency than a vapor engine.

This device typically uses the energy provided in the form of heat to do work and then exhausts the heat which cannot be used to do work. Thermodynamics is the study of the relationships between heat and work. The first law and second law of thermodynamics constrain the operation of a heat engine.

Application of Newton’s Laws of Motion: Towing a Boat