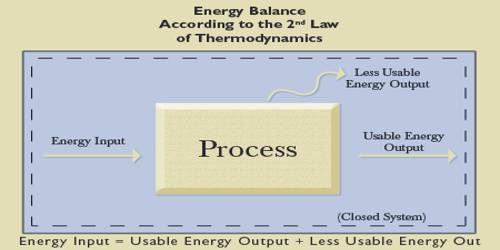 Heat energy can easily be obtained from different energies including mechanical energy: but without heat engine, mechanical energy or work cannot be obtained from heat. As for example, heat energy generated due to the fall of water from a waterfall cannot be changed in any other energy without the use of any engine. So, from extensive research on engine famous engineer, Sadi Carnot came to this conclusion that heat energy can never be transformed completely into work. This statement is the basis of the second law of thermodynamics.

Scientists Clausius and Kelvin independently gave Cantors above ideas into a general form which is known as the second law of thermodynamics. The second law of thermodynamics can be expressed in different forms but main theme of each statement is the same. The main theme of each statement is that heat can never spontaneously flow from a body kept at low temperature to a body at high temperature. It can be stated in another form, “efficiency cannot be one”. That means efficiency of anything cannot be one. Among all these statements Clausius’s statement is considered as the accurate and advanced one. Some of the special forms of the law are described below:

(a) Clausius’s statement: It is not possible to transfer heat by an automatic machine from a body at lower temperature to a body at a higher temperature without the help of external energy.

Alternately, Heat cannot by itself flow from a cold body to a hot body. 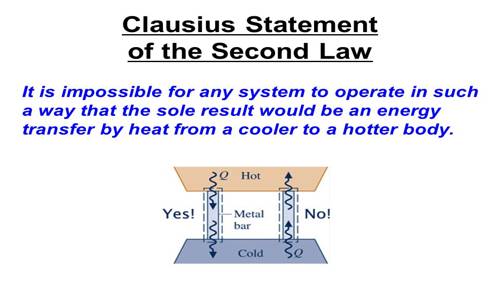 From the above statement, it is clearly understood that the second law of thermodynamics is in conformity with different events of other branches of physics. For example, a body cannot go from lower surface to higher surface without doing work from outside. Again, current cannot flow from lower potential to higher potential without doing work etc. From the above law, it is understood that heat can automatically flow from a warm body to a cold body.

When a body is allowed to roll from a hill it naturally comes down to the bottom. But if it is to be taken above from below external energy must have to be applied; that means work is to be done on the body. Till today no refrigerator has been invented which can do work without the supply of external energy. This event verifies the second law of thermodynamics given by Clausius.

(b) Kelvin’s statement: A Continuous flow of energy cannot be obtained from an object cooling it from its surroundings.

From this law, it is understood that heat can be transformed into work as long as the object from which heat is extracted is not cooler than the coolest point of the surrounding. If the temperature between the two bodies is equal, then heat will not flow from one body to eat body no matter whether the amount of heat contained by each body is more or less. 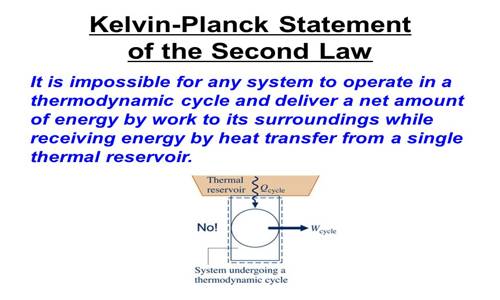 (c) Planck’s statement: It is not possible to construct an engine that will extract heat continuously from a heat source and will completely transform into work.

(d) Carnot’s statement: No engine can be built which can extract a fixed amount of heat and will convert it totally into work.

Why Carrot’s Cycle is Reversible?