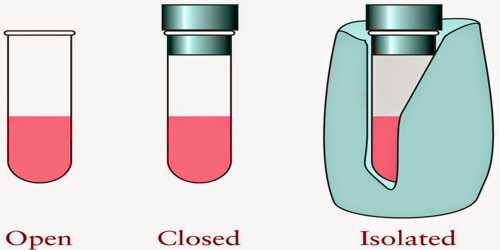 Suppose a piston, attached to a cylinder filled with gas is made to move by applying heat, hence the piston along with the cylinder is a thermal system and all other materials around it are considered as the surroundings. It is seen that in order to describe the thermal event or system thermodynamic coordinates or some important terms like pressure, volume, and temperature are needed. A fixed amount of material surrounded by a cover is considered to be a thermal system. Alternately, the fixed thermal part of the physical world that is considered during an experiment is taken as the thermal system.

Each thermal system should have a fixed volume, mass, and internal energy. A thermal system may be of different types; viz.- Open system, closed system and isolated system.

Different changes take place in thermodynamics. This change is of four types: viz.-