Home Physics Define Impulsive Force and Impulse of a Force 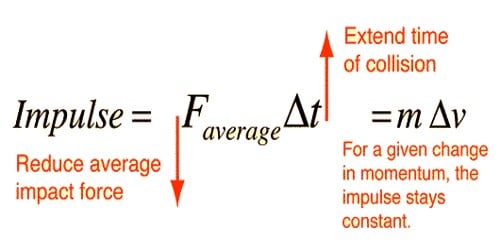 An impulsive force is a very great force acting for a very short time on a body, so that the change in the position of the body during the time the force acts on it may be neglected. It is defined as the rate of change of momentum in a reaction. It is measured by the transform of momentum in the body it acts on.

A car of mass 1000kg is traveling with a velocity of 25 m/s. The car hits a street lamp and is stopped in 0.05 seconds. What is the impulsive force acting on the car during the crash?

(ii) Impulse of a force

Impulse of a force is the force multiplied by the duration of time for which it acts. In other words, it is the transform of momentum the force causes in anybody. 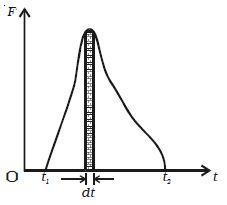 The impulse J of a constant force F acting for a time t is defined as the product of the force and time.

The impulse of force F acting over a time interval t is defined by the integral.

The impulse of a force therefore can be visualized as the area under the force versus time graph as shown in Figure. When a variable force acting for a short interval of time, then the impulse can be measured as,

The impulse of force is a vector quantity and its units are N s.

From Newton’s Second Law of Motion

but acceleration = change in velocity/time i.e. a = (v-u)/t, where v is the final velocity and u is the initial velocity

So, the impulse can also be considered as the change in momentum of an object.

Now, it is proved that, Impulse of force is the product of the average force and the time in which the force acts.

What is Angular Acceleration?

What is Rotational Motion?