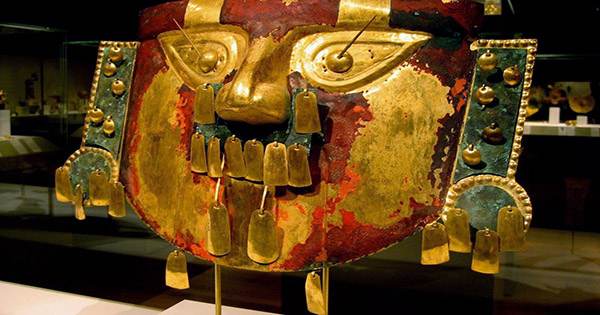 The Sicán civilization was one of Peru’s most important pre-Incan civilizations. Most information of the Sicáns has been lost for 700 years, but ornate gold artifacts discovered in graves reveal much of what we do know. A chemical study of the paint on a 1,000-year-old gold mask reveals that it contains human blood and bird egg proteins, providing a fresh understanding.

Sicán culture has been around for at least 500 years. While many of its contemporaries were stolen, a remarkable tomb from the Middle Sicán Period (1,100-900 years ago) managed to stay undisturbed underneath the Huaca Loro temple until the early 1990s. It was the first Middle Period aristocratic Sicán tomb scientifically excavate. When researchers entered it, they discovered a 40-50-year-old man skeleton upside down and painted red in the center of the tomb, surrounded by the remains of two women and two children.

A gold mask painted red and concealing the man’s detachable head, which, unlike the rest of him, was right side up, was among the objects found in the tomb. The American Chemical Society’s Journal of Proteome Research released an examination of the paint’s chemical makeup.

Cinnabar, a mineral often employed by the Sicáns for high-status persons and items, was originally identified as the red hue. The least fortunate used iron oxides and tree resin.

However, archaeologists have known since the beginning that cinnabar would not adhere to gold without a binding agent over such a long period. Initially, determining the binding agent proved too difficult, but now a team led by Oxford University’s Professor James McCullagh has done the infrared analysis, despite a horrified half of the globe begging them to put it back. This indicated the presence of proteins, which were later discovered to derive from a mixture of human blood and egg whites. It assumed that the same concoction was used to dye the whole skeleton.

The whole tomb appears to have been meticulously designed, implying that every placement, and hence every piece, was imbued with profound importance. The two female skeletons, for example, are positioned as though one is giving birth and the other is serving as a midwife. The skeletons of the children squat at a higher level. The tomb contained 1.2 tons of burial goods, about a third of which were metal, attesting to the upside-down man’s tremendous riches and rank. The mask, however, stood out even amongst all of this opulence.

The discoveries may be valuable to individuals looking for a way to tie inorganic pigments to gold lasting 1,000 years, but the scientists believe there is more to the option than just finding something sticky. According to the article, “the distinctive inverted arrangement of the skeleton adjacent to the two young adult women in parturition and midwifing stances shows that the targeted effect was the rebirth of the deceased leader,” and red oxygenated blood likely indicated the “life force.” The study states that Sicán sacrifice victims sliced at the neck to increase bleeding, thus life power kept for the affluent.