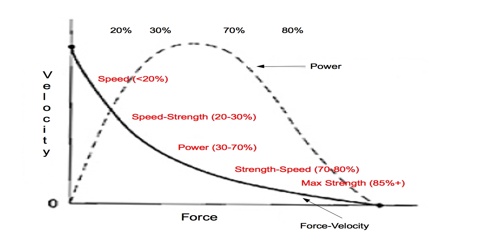 Force is defined as the interaction between two bodies, or it can also be defined as the push or pull experienced by an object when an external force acts on it. Force is expressed in terms of Newton.

This is the concept that is explained in Newton’s first law of motion.

Newton’s First Law: Consider an object with no force acting on it. If it is at rest, It will remain at rest; if it is moving, it will continue its motion in a straight line at a constant speed. The force exists through contact or non-contact way.

Examples of contact forces are pushing a box and kicking a ball while examples of non-contact force are gravitational force and electrostatic force.

Watt is the unit of power.

Example: A lift motor has to move a fully laden lift 4m between floors in 1.5s. The lift has a mass of 1850 kg (ignore friction).

The relation between Power, Force, and Velocity

Suppose force F is acting on a body for time t. If during this time the body moves along the direction of the applied force to a distance s, then work done by that force is, W = F x s

So, power = applied force x velocity of the body

If the displacement of the body, instead of being along with the force, is along a direction making an angle θ with the applied force, then

This equation represents a scalar product of two vector quantities.

This equation gives the relation between power, force, and velocity.

Power, in case of rotational motion:

In the case of rotational motion, we know,