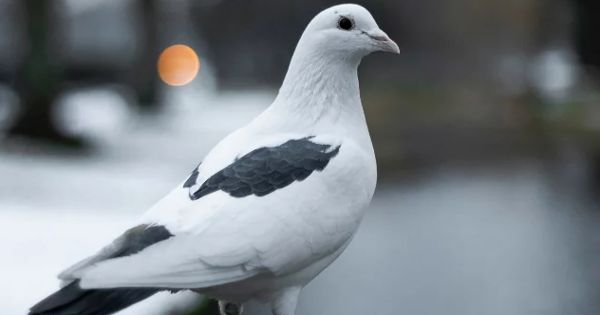 How do birds make decisions, and which brain areas are especially active when they solve problems? These questions are being investigated by Ruhr-Universität Bochum (RUB) researchers from the Department of Biopsychology. So far, only anesthetized birds and thus passive experiments have been investigated using functional magnetic resonance imaging (fMRI). As a result, studying brain processes while performing active tasks was not possible. Now, cognitive neuroscientists at the Biopsychology lab have built an experimental setup that allows them to perform fMRI examinations on awake pigeons and, for the first time, investigate cognitive processes. They published their results online in the journal “Nature Communications”.

Stacho and his colleagues used 3D polarized light imaging to examine microscopic slices of three homing pigeon brains to determine how bird brains support these mental abilities. This high-resolution technique allowed them to examine the circuitry of the pallium, a forebrain region thought to be the most similar to the mammalian neocortex. Despite the absence of the cortex’s six layers, the pallium has distinct structures linked by long fibers.

For the first time, a research team examined pigeon brains using functional magnetic resonance imaging while the birds were actively involved in a discrimination task.

Opening and closing the beak

The animals in the new experimental setup can be given tasks that they actively work on. During this time, continuous fMRI recordings are made to record the activity of the brain areas that are active during task processing. Unlike in human fMRI examinations, where participants can respond to tasks by pressing buttons, pigeons respond by opening and closing their beaks, which is detected by a sensor beneath the beak.

In a test study, the researchers assessed the quality of the acquired fMRI images. Pigeons had to learn to distinguish between two colors. The animals learned to open their beaks in response to the appearance of the correct color and were rewarded for correct answers. “This study was just a test run to see if the scan in awake behaving birds works as expected,” explains Mehdi Behroozi, the study’s first author.

The way is open for more complex investigations

“The fMRI data from the test study revealed that even with this simple discrimination task, a whole network of areas in the pigeon’s brain is active, which could not yet be represented in its entirety,” says Onur Güntürkün, Professor of Biopsychology at RUB, of the test study’s findings. “The way is now clear for investigations involving more complex cognitive tasks. This breakthrough will help to identify the brain basis of these abilities, which is especially important at a time when we are learning more and more about how intelligent birds are “Güntürkün adds.

Despite this alleged mental deficit, comparative psychologists used birds in their animal cognition studies throughout the twentieth century. They were especially fond of common pigeons, whose brains are roughly the size of a shelled peanut, as well as canaries and zebra finches, whose brains are even smaller. Scientists discovered that pigeons have incredible memories, with an uncanny ability to recognize human faces and expressions, letters of the alphabet, and even paintings by Monet and Picasso.

Other researchers discovered Clark’s nutcrackers, scrub jays, and chickadees had extraordinary memories. Every autumn, nutcrackers, for example, harvest and cache over 30,000 pine seeds, distributing them in thousands of tiny caches they must remember throughout the winter.