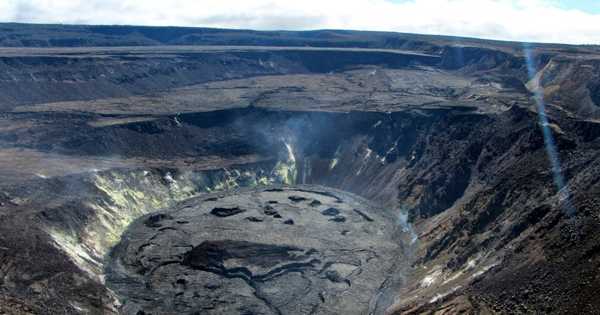 Every year, thousands of earthquakes occur in the state of Hawaii. They are caused by eruptive processes within active volcanoes or deep structural changes caused by the weight of the islands on the Earth’s underlying crust. Most are so small that only sensitive instruments known as seismometers can detect them. Some of them are powerful enough to be felt on one or more of the islands. A few large earthquakes cause significant damage and have an impact on residents throughout the state.

Geologists reported a swarm of earthquakes at Hawaii’s Kilauea volcano, which is not erupting. The tremors began overnight and continued into the morning, according to the Hawaiian Volcano Observatory.

Thousands of earthquakes occur every year in the State of Hawaii. Geologists said they had detected a swarm of earthquakes at Hawaii’s Kilauea volcano, though it is not erupting.

The vast majority of earthquakes in Hawai‘i occur on and around the island of Hawai‘i, particularly in the southern districts of the island, where the most active volcanoes in the state are Klauea, Mauna Loa, and L‘ihi. The majority of these earthquakes are caused by magma moving within volcanoes, accumulating in shallow reservoirs, or erupting at their summits or rift zones. Other earthquakes occur in the crust and upper mantle along tectonic faults.

As of 4:30 a.m., more than 140 earthquakes had been recorded. The most powerful was magnitude 3.3. The majority were less than magnitude 1. At the same time as the swarm, scientists observed changes in the volcano’s ground surface. According to the observatory, this could indicate that magma was moving beneath the south part of Kilauea’s caldera. There has been no surface evidence of lava.

The observatory raised the volcano alert level from advisory to watch, indicating that Kilauea is experiencing heightened or escalating unrest with increased potential for an eruption. Kilauea is one of the most active volcanoes on the planet, erupting 34 times since 1952.

During the final year of an eruption that lasted more than three decades, lava surged through volcanic vents in a residential neighborhood, destroying approximately 700 homes. Kilauea is located on the Big Island of Hawaii, about 200 miles south of Honolulu.

Magma movement within and eruptions from Hawaii’s currently active volcanoes are typically accompanied by hundreds to thousands of small earthquakes with magnitudes less than four. They form in magma storage regions or along magma’s paths as it moves upward or laterally prior to an eruption. Volcanic earthquakes, as they are colloquially known, are important for monitoring volcano activity.

A schematic cross-section of Klauea Volcano’s south flank on the southeast coast of the Hawaiian island of Oahu—yellow stars indicate two dominant sources of damaging earthquakes of magnitude 5 or greater. The second class of seismic sources in Hawaii are earthquakes caused by slippage along tectonic faults.

A schematic cross-section of how the weight of the Hawaiian Islands bends the lithosphere and increases stress, which is released during mantle earthquakes. The third type of Hawaiian earthquake is caused by the weight of the islands above flexing or bending the Earth’s crust and upper mantle, known as the lithosphere. This is the most common cause of damaging earthquakes north of Hawai‘i. This type of earthquake usually occurs more than 20 kilometers (12 miles) below sea level.

NASA Warns that Crop Yields are Reduced due to Climate Change