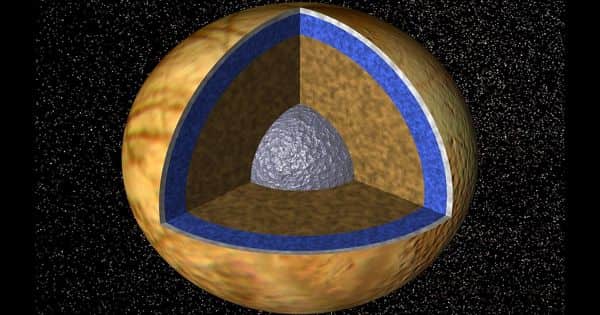 High-pressure experiments show that the hidden oceans of water planets selectively leach magnesium from common rock minerals at pressures of hundreds of thousands of atmospheres and temperatures above 1000 degrees Celsius.

What is going on deep beneath the ice planets’ surfaces? Is there liquid water, and if so, how does it interact with the rocky “seafloor” of the planet? Water selectively leaches magnesium from typical rock minerals on water-ice planets the size of our Earth and up to six times its size, according to new experiments. In a lab, conditions with pressures of hundreds of thousands of atmospheres and temperatures above 1000 degrees Celsius were recreated to mimic planets similar to, but smaller than, Neptune and Uranus.

The mechanisms of water-rock interaction at the Earth’s surface are well understood, and our understanding of the complex cycle of H2O in our and other terrestrial planets’ deep interiors is constantly improving. However, we don’t know what happens at the interface between hot, dense H2O and the deep rocky shell of water-ice planets at pressures and temperatures orders of magnitude higher than those found at the bottom of the world’s deepest oceans. Neptune and Uranus are ice-giants in the solar system; they have a thick external water-ice layer that is underlain by a deep rocky layer, and it is still debated whether the temperature at the interface is high enough to form liquid water.

Laboratory experiments allow insights into the processes under the extreme pressure and temperature conditions of distant worlds.

An international research team lead by Taehyun Kim of the Yonsei University of Seoul, Korea, including scientists from the University of Arizona, from DESY, from Argonne National Laboratory, and Sergio Speziale of the GFZ German Research Centre for Geosciences, conducted a series of challenging experiments both at PETRA III (Hamburg) and the Advanced Photon Source (Argonne, U.S.A.) showing how water strongly leaches magnesium oxide (MgO) from certain minerals, i.e. ferropericlase (Mg, Fe)O and olivine (Mg, Fe)2SiO4 at pressures between 20 and 40 Gigapascal (GPa).

This equates to 200,000 to 400,000 times the atmospheric pressure on Earth and temperatures above 1500 K (? 1230 °C), conditions found at the interface between deep oceans and the rocky mantle of water planets in the sub-Neptune class. “These findings open up new scenarios for the thermal history of large icy planets like Neptune and Uranus,” says Sergio Speziale. The findings of this study have been published in the peer-reviewed journal Nature Astronomy.

Kim’s team performed a series of high-pressure and high-temperature experiments in a diamond anvil cell both at DESY’s X-ray light source PETRA III and the Advanced Photon Source in Argonne (USA) that demonstrate how water strongly leaches magnesium oxide (MgO) from the minerals ferropericlase (Mg, Fe)O and olivine (Mg,Fe)2SiO4 at pressures between 20 and 40 gigapascals (GPa), corresponding to between 200,000 and 400,000 times the atmospheric pressure at sea level, and temperatures above 1230 degrees Celsius, conditions that are encountered at the interface between the deep ocean and the rocky mantle inside a sub-Neptune class of water planets. These findings also have a direct impact on the thermal history of large icy planets such as Uranus and Neptune.

Tiny pellets of ferropericlase or olivine powder were loaded with water into a tiny sample chamber (less than a millimetre in diameter) drilled in a metal foil and squeezed between two gem-quality diamond culets in a diamond anvil cell (DAC). An infrared laser was shone through the diamond anvils to heat the samples. Mineral transformation and breakdown caused by water reactions were studied using synchrotron x-ray diffraction. Across full heating and quenching cycles, there was a sudden decrease in diffraction signal from the starting minerals, as well as the appearance of new solid phases such as brucite (magnesium hydroxide).

“This demonstrated the onset of chemical reactions and the dissolution of the magnesium oxide component of both ferropericlase and olivine; the dissolution was strongest in a specific pressure-temperature range between 20 to 40 Gigapascal and 1250 to 2000 Kelvin,” Sergio Speziale says. Scanning Electron Microscopy (SEM) and X-ray spectroscopy of the recovered samples confirmed the details of the reaction process and the subsequent chemical segregation of MgO from the residual phases. “At these extreme pressures and temperatures, the solubility of magnesium oxide in water approaches that of salt at ambient conditions,” Sergio Speziale explains.

The scientists conclude that the intensive dissolution of MgO at the interface between the H2O layer and the underlying rocky mantle could result in chemical gradients in the early hot phases of the planets’ history in water-rich sub-Neptune exo-planets with appropriate size and composition, such as TRAPPIST-1f. These gradients with differentiated magnesium oxide distributions at the planetary seafloor may have been preserved in part during their long cooling evolution. Tracks of initial relatively shallow interactions between water and rocky material during planetary accretion could also be preserved for billions of years in large icy planets like Uranus.

The Keystone XL Pipeline Project has been Terminated, Marking Win for Indigenous Groups