The Earth receives many times more energy from the sun than we humans can use. Solar energy is one of the most popular ways of turning sunlight into electricity. But the pace at which the world is moving, we’re all desperately trying to find a way to conserve energy.  This energy is absorbed by solar energy facilities, but one of the challenges of solar energy is to store it efficiently, such that the energy is available when the sun is not shining. This led scientists at Linköping University to investigate the possibility of capturing and storing solar energy in a new molecule. According to a report published in Nanowerk, this molecule can absorb energy from sunlight and store it in chemical bonds.

“Our molecule can take on two different forms: a parent form that can absorb energy from sunlight, and an alternative form in which the structure of the parent form has been changed and become much more energy-rich while remaining stable. This makes it possible to store the energy in sunlight in the molecule efficiently,” says Bo Durbeej, professor of computational physics in the Department of Physics, Chemistry, and Biology at Linköping University, and leader of the study. The findings of this study have been published in the Journal of the American Chemical Society. 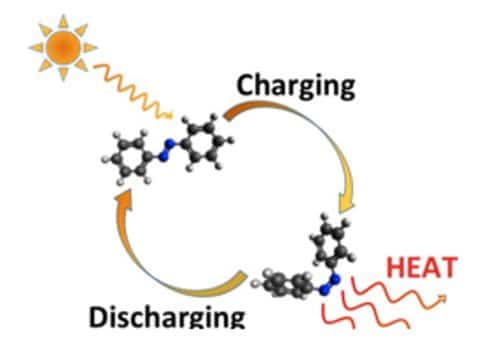 In the researcher’s prototype system, the Sun’s energy is trapped using a satellite dish-like device that follows the motion of the sun and condenses its sunlight into a single point containing the isomer. It’s common in research that experiments are done first and theoretical work subsequently confirms the experimental results, but in this case, the procedure was reversed. Bo Durbeej and his group work in theoretical chemistry and conduct calculations and simulations of chemical reactions. The team behind the project believe their invention could be used in domestic heating systems, which could pass the molecules from roof to heating system in a circular process. This involves advanced computer simulations, which are performed on supercomputers at the National Supercomputer Centre, NSC, in Linköping. The isomers are then stored at room temperature to better maintain the energy potential of the molecule and minimize energy loss.

In order to store large amounts of solar energy in the molecule, the researchers have attempted to make the energy difference between the two isomers as large as possible. To release the energy, the isomer is then filtered through a special catalyst that can control the release of the pent up energy. The parent form of their molecule is extremely stable, a property that within organic chemistry is denoted by saying that the molecule is “aromatic.” The basic molecule consists of three rings, each of which is aromatic. When it absorbs light, however, the aromaticity is lost, such that the molecule becomes much more energy-rich. The reaction which takes place within the catalyst heats up the isomer by 63 degrees celsius, releasing the energy and simultaneously returning the molecule to its original state to be reused.

The researchers deployed a solar thermal collector for the process, designed as a concave reflector with a pipe in the center, and acting similarly to a satellite dish, tracking the sun’s path and focusing its rays to a point. “Most chemical reactions start in a condition where a molecule has high energy and subsequently passes to one with low energy. Here, we do the opposite – a molecule that has low energy becomes one with high energy. We would expect this to be difficult, but we have shown that it is possible for such a reaction to take place both rapidly and efficiently,” says Bo Durbeej. This means solar energy caught on one day can be preserved and later used during periods where generating traditional solar power is not feasible – such as at night or on overcast days.

The researchers will now examine how the stored energy can be released from the energy-rich form of the molecule in the best way. When energy is needed, the liquid isomer is drawn through the catalyst and warmed.