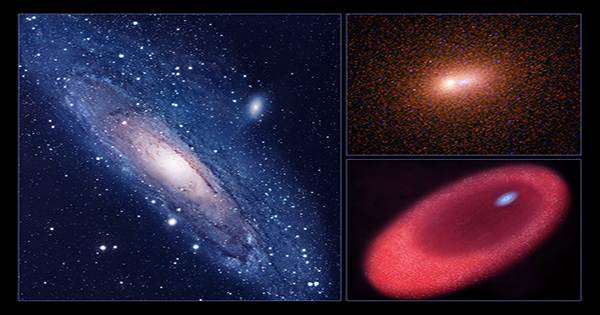 Because black holes do not produce light, detecting them is difficult. They are caught either while feeding – siphoning material so swiftly that it glows – or when they collide and generate enough gravitational waves for us to notice. It is considerably more difficult to find the quieter, smaller black holes. Astronomers can search for unusual movements in neighboring stars. A team detected a new tiny black hole in the Large Magellanic Cloud, our galaxy’s closest sister galaxy.

The black hole is 11 times as massive as the Sun, according to the Monthly Notices of the Royal Astronomical Society, which is small for the class of stellar-mass black holes and even smaller than the supermassive black holes at the center of the galaxy, which weigh millions if not billions of times our Sun. The black hole found in NGC 1850, a star cluster. While this is not the first black hole identified in a star cluster, it is the first in a young one. This cluster of stars is barely 100 million years old, making it a newborn in the universe. The discovery of such an object is quite intriguing, as it made possible by studying the velocity of its partner star, which is nearly five times the mass of our Sun.

“Like Sherlock Holmes, we’re staring at every single star in this cluster with a magnifying glass in one hand, attempting to uncover any evidence for the presence of black holes but without seeing them directly,” lead author Sara Saracino of Liverpool John Moores University said in a release. “The result displayed here represents just one of the sought criminals, but once you’ve located one, you’re well on your way to finding many more, in various clusters.”

To detect black holes like these, sophisticated sensors are necessary. Over the course of two years, the team used the Multi-Unit Spectroscopic Explorer (MUSE) at ESO’s Very Large Telescope to collect data. Researchers may use the tool to analyze individual members of congested locations like star clusters, obtaining data on 1,000 stars in a single image. Future observations will aim to look at even younger clusters in order to better understand them and their black holes as they form, as well as compare them to older clusters and black holes that have previously been identified and those that have yet to be discovered.

“Every single discovery we make will be crucial for our future knowledge of star clusters and the black holes that reside within them,” says research co-author Mark Gieles of the University of Barcelona in Spain. Even more hidden black holes might be discovered when the Extremely Large Telescope goes online later this decade.