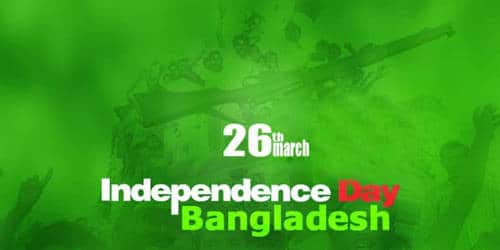 Every country has some achievements that they can take in pride. The 26th of March is our independence day. Our Independence Day is our national event and achievement. It is a red-letter day in our national life. The day is a memorial to the deaths of thousands of civilians who died in the Bangladesh Liberation War. On this day in 1971, the independence of Bangladesh was declared and the liberation war was started. On March 26, 1971, a country’s name included on the map of the world. Bangladesh’s Independence Day enclosed on this day. It commemorates the country’s declaration of independence from Pakistan in the late hours of 25 March 1971 by the “Father of the Nation” Bangabandhu Sheikh Mujibur Rahman before he was arrested by Pakistani forces. It is a day of taking on oath of dedicating life for the cause of the motherland.

The struggle of this time is struggling for independence. The Pak armies fell upon us and killed us mercilessly. On the night of 25th March 1971, the Pakistani Army brutally committed genocide on unarmed civilian Bengalis in the name of “Operation Searchlight”. They burnt our houses, cottages, mills, factories and so on. On 26 March 1971, the independence of Bangladesh was declared and the Liberation War began. We also attacked the Pak armies and made them surrendered on 16 December 1971. Independence for Bangladesh was gained through a nine-month civil war against the Pakistani Army, which resulted in the loss of about 3 million lives. Thus, after a sea of blood and lots of sacrifices, we achieved our liberation from Pakistan. They are martyrs. They are immortals. Our freedom of the millions of martyrs in the blood of the sun.

This day is a national holiday. Every year we celebrate this day in a befitting manner. TV and radio stations broadcast special programs and patriotic songs in honor of Independence Day. We recollect their supreme sacrifice and respect their great contribution. The day is a memorial to the deaths of millions of civilians and valiant freedom fighters who died in the Bangladesh Liberation War. The national anthem and patriotic songs are sung. On the occasion of Independence Day, the whole country wears festive colors. The national flag is hoisted. Seminars, symposiums, debates, Milad mahfil, and many other cultural functions are also held. Today we are proud as an independent and sovereign nation. We celebrate this day every year with great honor and solemnity.

What is Stereophonic Sound?

Pros and Cons of Country Life and City Life