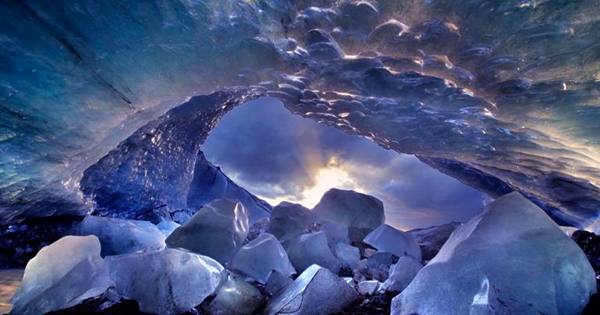 Western New Mexico was so inviting to Spanish explorers that they called it a bad country, El Malpais. Yet the people who lived there, known as the ancestors, were enough to build multi-story “great houses.” To do this they must have access to a stable water supply through many years of drought.

The New Mexico Desert is home to one of the most advanced pre-colonized civilizations in the United States, including some of the oldest surviving buildings in the United States. The region is a hotspot for later arrivals, as the region is in stark contrast to the Deer River valleys and fertile farms that give birth to great cities elsewhere. A partial explanation has now emerged in the form of lava tubes, which apparently allowed people to survive the harsh drought in the region.

Bogdan Onac, a professor at the University of Southern Florida, explored a lava tube at the El Malpais National Memorial and found that it was an explanation of what he thought. Even today the tube is filled with ice – 2,268 meters (7,500 feet) above sea level and reflects the shape of the cave as it pulls in the cold air and carries warmth.

Bogdan discovered deep charcoal in pipes, near which large houses were abandoned, about 600 years ago, with another epoch dating back 1,970 to 1,070 years. He realized that the people who brought the wood could burn in the cave and use the heat to melt the ice, and must leave the cave during the process of smoking to die of suffocation or to manage the size of the fire with care. Although Onac acknowledges that these fires may have a religious significance, the molten water sometimes stands in death due to the thirst of the predecessor Puebloans.

In the scientific report, Onac revealed that the dates of the charcoal deposits matched the large droughts obtained from tree rings and lake sediments elsewhere in the American West. “This discovery highlights one of the many human-environmental activities in the Southwest at a time when climate change is forcing people to look for water resources in unexpected places,” Onac said in a statement.

For archaeologists, the discovery was as exciting as it was frustrating – the ice is melting faster than ever before when humans deliberately encouraged the process. “In the current climate situation, there is depressing environmental and archaeological evidence that the melting of melted cave ice is both worrisome and transferable,” Onac noted.

One believes that in ordinary years the ice would melt at will and the former would leave pools near the entrance to what the Puebloans could drink. During the dry period, the ice would retreat because whatever melted was not replaced by filtering the water through the rock fissures. This forced water dependents to travel to caves, start lighting fires, and carry what had melted. In addition to woodcarving, Onac found a fine trace of pottery. The woodpecker is found in many of the other lava tubes, but not in the abundance of Cave 29.