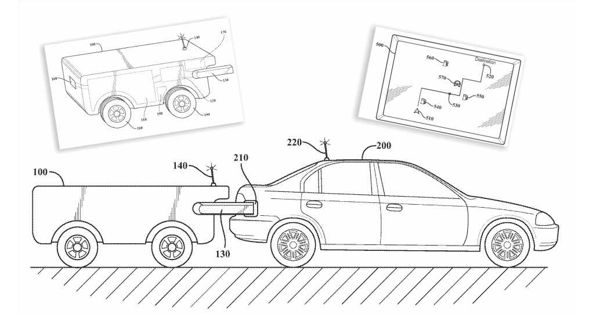 In the future, autonomous tanker drones could be gracing the cities. Toyota has patented an automated drone refueling vehicle that can drive out to your place and top up your car’s gasoline tank, hydrogen fuel cell, or battery on the move, while The Drive spots—almost like those military tankers that can refuel fighter jets when they’re both big. The system seems to be identical to that of the autonomous aerial refueling aircraft.

From the patent drawings, the autonomous recharging/refueling drone will have to be incredibly similar to the car. The machine will work off GPS to find cars in need of fuel or power—be it petrol, diesel, or electricity.

The patent filed by automaker Toyota has come to light, first discovered by the Drive, which details the company’s proposals for self-driving tanker drone refueling and recharging. According to patent applications, the “autonomous drone” contains a storage room, a fuel delivery system, and a central controller. It’s going to be days of petrol or battery control burning out and looking for help on the side of the lane. That is if the Toyota patent came to fruition. It is not clear whether the vehicle is intended to refill the vehicle in front of it when on the move or simply when stationary.

Looking carefully at the patent, it’s impossible to see if the vehicles being refueled or refilled will have to be stationary. There is a fair possibility that the whole machine will run when the vehicle is driving. The drone may also potentially make multiple refueling stops along a single path before going back to refuel itself. The patent states that such a device could be used in self-propelled cars, but it does not state that it does not work with normal vehicles.

From the patent drawings, the autonomous recharging/refueling drone will have to be incredibly similar to the car. The machine will work off GPS to find cars in need of fuel or power—be it petrol, diesel, or electricity. Proximity sensors, GPS, and automated fuel ports may allow such a drone to take charge of the whole operation, with the driver sitting back and relaxing inside the vehicle. Then the sensors will kick in to ensure that the drone does not roll into the rear of the vehicle until automatic fuel ports are opened for the refueling process.

The drone itself will be able to perform multiple refueling stops along its path before returning to the base to charge itself. Obviously, this is just a single patent filing—doubtful it’s that tech like this will soon make it into the market. A variety of competing charging systems may also make such a device dead upon arrival. The drone will locate cars to refuel using GPS, and then use a variety of other sensors, such as the proximity form, to find its way over to the fuel filler/recharging port to replenish the range of the aircraft.

Of course, there are no time schedules for innovations like these to go on public highways, and it is in effect impractical before truly independent cars on mass markets are licensed for use alongside drivers on roads. In reality, we have not yet achieved level 5 autonomy. In other words, drivers are still very much needed to manage the roads—meaning that the AI isn’t even here yet that would allow a device like this to drive out to where it’s needed. Although we would like to see these rechargeable drones coming into the streets and help stranded motorists at that time.