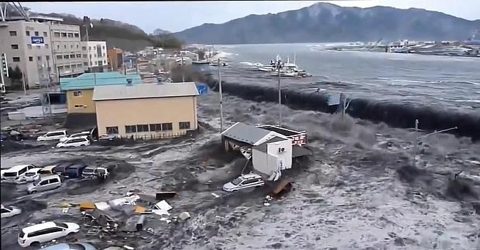 A tsunami is a great wave or series of waves. It extends from the surface water to the sea floor and moves the entire vertical section of ocean through which it speeds. The greater the ocean depth, the faster the tsunami travels. Speeds of up to 600 miles per hour have been recorded. Far out in the ocean the tsunami can hardly be noticed, but toward land it slows down as the bottom of the wave drags on the seabed. Its top then rises to great heights of fifty to a hundred feet or more.

Tsunamis are not the same as tidal waves, which are caused by cyclonic storms and have frequently struck Bangladesh. Both waves cover the land with water and cause much destruction, but the tsunami strikes without warning. Tidal waves, on the other hand, can be predicted by the wind speed and the level of the tide. Tsunamis can reach much rater heights than tidal waves. The causes of both waves are different. Tidal waves result from the powerful wind of storms, whereas a tsunami is caused by shifts of the earth under the sea. Fortunately Bangladesh has never in living memory been hit by a tsunami. Fig: A tsunami hits the north-east coast of Japan after a magnitude 9.0 earthquake on March 11, 2011.

On Dec, 26, 2004, almost 300.000 people in 11 countries were killed by a tsunami caused by a 9.3 earthquake off the coast of Indonesia. The earthquake s magnitude was at first estimated to be 9.0, but later information received put the magnitude at 9.3. Therefore the energy released was three times larger than originally thought; making this the second largest earthquake ever instrumentally recorded. The largest earthquake ever recorded, which measured 9.2 was in Chile on May 22, 1960. An International Tsunami Survey Team (ITST) studying the effects of the December 26 Tsunami on Indonesia’s Island of Sumatra documented wave heights of 20 to 30 m (65 to 100 ft) at the islands northwest end. The effects of the tsunami were felt as far away as Somalia.

Scientists now have an effective system for locating a tsunami at its source. They can calculate when it will arrive at points of land and can warn people to move to higher areas.