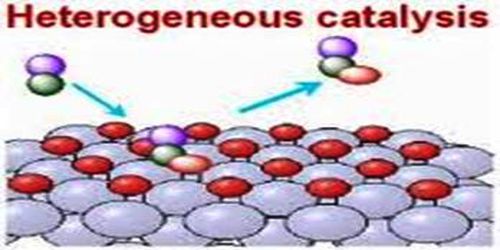 The chemical engineer regularly has to compare kinetic data for heterogeneous reactions merely and precisely in order to make practical predictions of reaction rates over a variety of conditions. The Langmuir-Hinshelwood approach, which is regularly used for this reason, does not have the theoretical validity usually attributed to it and its use leads to unnecessary mathematical complexity. A simpler technique of investigation is suggested which is based on power dependencies of the rate on concentrations, the powers being limited to integral of half-integral values. The data for numerous reactions are shown to be adequately associated by the suggested process, which is simple and convenient.

It has been mentioned earlier that many reactions are greatly influenced by the walls of the containing vessel or by the presence of a solid surface, such as metals, metal oxides and salts. These material bodies, by virtue of their presence not, only accelerate or retard a reaction but often alter the very nature of the reaction. Primary alcohols on decomposition may give either olefines and water or aldehydes and water depending on the nature of the solid. This class of reactions which are influenced or modified due to the presence of material body constituting a different phase is termed heterogeneous reactions. The effect of solid phase, which will be designated henceforth as third body, is quite specific in nature. Instead of trying to go deep into the subject, attempts will be made to study the effect of pressure and temperature only.