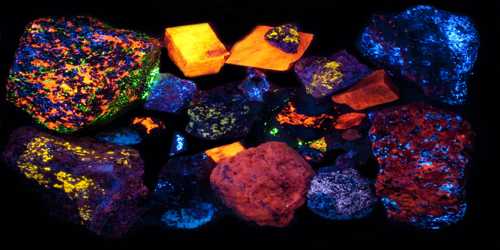 Emission of light by excited atom or molecules soon after excitation has stopped is known as fluorescence. It is the emission of light by a substance that has absorbed light or other electromagnetic radiation. In fluorescence the life time of the excited molecules or atoms is of the order of 10-6 seconds or lower, i.e., the emission takes place within 10-6 seconds or less after irradiation. Fluorescence practically ceases when the incident irradiation has stopped. The wavelength of the emitted radiation is, in general, greater than that of the incident radiation. This indicates that maw energy is left in the absorbing molecules. This fact was discovered by Stokes. There are a number of exceptions to this law.

Fluorescent materials create light instantaneously, when the atoms inside them take up energy and become “excited.” When the atoms return to usual, in as small as a hundred thousandth of a second, they give out the energy that excited them as minute particles of light called photons. Shine ultraviolet (UV) light light on a stolen TV or camera and you might find someone’s address shining back at you, written in invisible ink. The ink is made of fluorescent chemicals that absorb energy from the UV light, become excited, and then give out the energy as photons of visible light. Switch off the UV light and the ink disappears again.

Which Factors Affecting the Rates of Reaction?