Virtual Reality (VR) is the use of computer technology to create a simulated environment. The term refers to a computer-generated, three-dimensional environment. VR is the technology by which you can immerse yourself in an environment that seems astonishingly realistic. Unlike traditional user interfaces, VR places the user inside an experience. It is the use of computer technology for creating a simulated environment. Instead of viewing a screen in front of them, users are immersed and able to interact with 3D worlds. It is very popularly used for playing computer games. By simulating as many senses as possible, such as vision, hearing, touch, even smell, the computer is transformed into a gatekeeper to this artificial world. Unlike traditional games where you experience the gaming environment by viewing it on the screen, you are directly placed in the environment! In order to experience and interact with virtual reality, you’ll need the proper equipment, like a pair of VR glasses or a headset.

Virtual Reality’s most immediately-recognizable component is the head-mounted display (HMD). Senses such as touch, hearing, smell, and vision are simulated in these environments. Human beings are visual creatures, and display technology is often the single biggest difference between immersive Virtual Reality systems and traditional user interfaces. Using VR gear such as headsets, you can walk around and play the game in that 3D world. This technology is used to create immersive experiences that can help educate and even entertain consumers. Augmented Reality (AR) is the technology used for improving this virtual environment.

The major players in this field are Facebook’s Oculus Rift, Sony’s PlayStation VR (PSVR), and the HTC Vive. VR shows promising applications for pain relief and PTSD, for education and design, for both telecommuting and office work. VR allows us to immerse ourselves in video games as if we were one of the characters, learn how to perform heart surgery, or improve the quality of sports training to maximize performance. 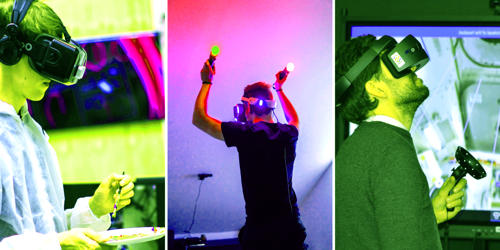 Virtual Reality is one of the technologies with the highest projected potential for growth. Nowadays, the market is demanding applications that go beyond leisure, tourism, or marketing and are more affordable for users. Virtual interfaces also need to be improved to avoid defects such as clipping, which makes certain solid objects appear as though they can be passed through.

The VR technology is not only used for entertainment, but it is also used by the U.S. Navy and Coast Guard for training staff. They use a VR game called VirtualShip. AR and VR are used by doctors while performing surgery. Visitors in an amusement park or a museum can also use the technology to enhance their experience. Virtual reality software can be used to build experiences for consumers to virtually test products, learn something new, or build something themselves.

The VR industry is expected to reach close to $40 billion by 2021. The entertainment industry is after all a multi-billion dollar one and consumers are always keen on novelty. Virtual reality has many other, more serious, applications as well. Medicine, culture, education, and architecture are some of the areas that have already taken advantage of this technology. Here are some VR job positions you can look out for: