The cost of solar and wind power has been declining rapidly in recent years. New solar and wind projects are undercutting the cheapest and least sustainable of existing coal-fired plants, the International Renewable Energy Agency, IRENA, said in a study. Building new wind and solar plants will soon be cheaper in every major market across the globe than running existing coal-fired power stations, according to a new report that raises fresh doubt about the medium-term viability of Australia’s $26bn thermal coal export industry. The report highlights that new renewable power generation projects now increasingly undercut existing coal-fired plants. The all-in cost of going solar is cheaper than the going-forward costs of power produced by existing coal plants. All we need to decide is when we’re ready to join the revolution.

Today, renewables are the cheapest form of electricity generation in two-thirds of the world as reported by Bloomberg New Energy Finance (BNEF). Renewable electricity costs have fallen sharply over the past decade, driven by improving technologies, economies of scale, increasingly competitive supply chains, and growing developer experience. While some countries are moving faster than others, the analysis by the Carbon Tracker Initiative, a climate finance think tank, found renewable power was a cheaper option than building new coal plants in all large markets including Australia and was expected to cost less than electricity from existing coal plants by 2030 at the latest. Costs for solar and wind power technologies also continued to fall year-on-year. The all-in cost of going solar is cheaper than the going-forward costs of power produced by existing coal plants.

Solar and wind power costs have continued to fall, complementing the more mature bioenergy, geothermal and hydropower technologies. Solar photovoltaics and wind energy were already cheaper than electricity from about 60% of coal stations, including about 70% of China’s coal fleet and half of Australia’s plants, it said.

Right now, Renewable energy currently accounts for only 17 percent of electricity generation in the United States—provided predominantly by wind and hydro energy, with solar power growing rapidly in the space. In Japan, where Australia sells nearly half its exported thermal coal, wind power was found to cost less than new coal plants and was expected to be cheaper than existing coal by 2028. Solar power in Japan was forecast to be a better option than new coal by 2023 and existing coal by 2026. A clean energy future is on the way and it seems the shift is inevitable, which is a major win for the planet. 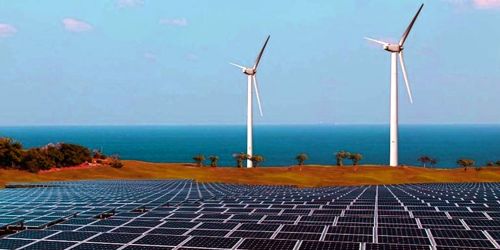 Continuing cost declines confirm the need for renewable power as a low-cost climate and decarbonization solution, aligning short-term economic needs with medium- and long-term sustainable development goals. The report acknowledged this trend did not necessarily mean coal power would be pushed from the market within a decade. But the group found that coal power would struggle if markets were priced fairly. It called on governments to block new coal projects and phase our existing coal plants, in part by changing regulations to allow renewable energy to compete on a level playing field.

Australia is the world’s second-largest thermal coal exporter after Indonesia and is the biggest trader in metallurgical coal, which is used in steelmaking

The export value of both forms of coal dropped notably last year. The spot price of thermal coal slumped more than a third from US$100.73 to US$66.20, its biggest fall in more than a decade.

Renewable power installations could form a key component of economic stimulus packages in the wake of the COVID-19 pandemic. Before the coronavirus outbreak, the government’s latest resources and energy quarterly report estimated the declining price would cut earnings from thermal coal exports from a record A$26bn in 2018-19 to A$20.6bn this financial year.

The report also found that more than 60 percent of global coal power plants are generating electricity at a higher cost than it could be produced by building new renewables. A more detailed analysis by several think tanks found that coal-fired electricity fell about 3% in 2019, the biggest drop on record after more than four decades of near-uninterrupted growth in which coal power has been a primary driver of the climate crisis. China’s use of coal plants continued to climb while generation in the US and Europe fell by 16% and nearly a quarter.

Within Australia, black and brown coal provides about two-thirds of the electricity used in the five eastern states, but this is expected to fall as old plants continue to close. According to federal government projections, renewable energy is expected to meet nearly 50% of national demand by 2030. The authors of the report suggested the report should be a signal to policymakers to shift their priorities toward investments in renewables.