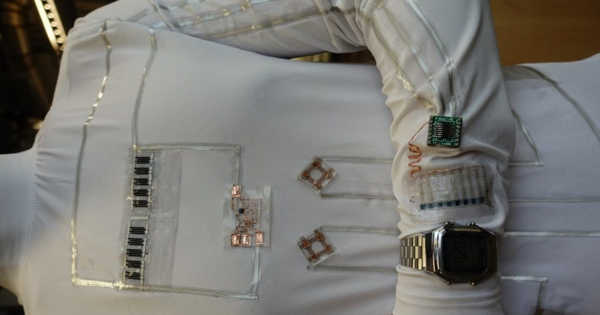 Researchers have devised a method to wirelessly power up to ten wearables on a user using a single device, such as a mobile phone or smart watch. The human body is used as a medium for transmitting power in this novel method. In addition, their system can harvest unused energy from electronics in a typical home or office environment to power the wearables.

Wearable technology advancements are reshaping how we live, work, and play, as well as how healthcare is delivered and received. Smart watches and wireless earphones are examples of wearables that have made their way into everyday life, while in the healthcare setting, common devices include wearable injectors, electrocardiogram (ECG) monitoring patches, listening aids, and more.

The issue of keeping these wearables properly and conveniently powered is a major pain point for their users. As the number of wearables used grows, so does the need to charge multiple batteries, consuming massive amounts of electricity. Many users find it inconvenient to charge multiple devices every day, and service disruptions occur when batteries run out.

This novel method uses the human body as a medium for transmitting power. Their system can also harvest unused energy from electronics in a typical home or office environment to power the wearables.

A research team led by Associate Professor Jerald Yoo from the Department of Electrical and Computer Engineering and the N.1 Institute for Health at the National University of Singapore (NUS) devised a solution to these issues. Their technology allows a single device, such as a smartphone in a user’s pocket, to wirelessly power other wearable devices on the user’s body by using the human body as a medium for power transmission. The team’s innovative system has an added benefit: it can harvest unused energy from electronics in a typical home or office environment and use it to power the wearables.

Their achievement was first published in the journal Nature Electronics on 10 June 2021. It is the first of its kind to be established among existing literature on electronic wearables.

Using the human body as a medium for energy transmission

Power transmission and energy harvesting approaches are required to extend battery life and sustain fully autonomous – yet wireless – operations of wearable devices. Traditional approaches for powering up body area wearables, on the other hand, are limited by the distance that power can be transmitted, the “path” that energy can travel without encountering obstacles, and the stability of energy movement. As a result, none of the current methods have been able to provide long-term power to wearables placed throughout the human body.

The transmitter only needs to be placed on a single power source, such as a smartwatch on a user’s wrist, while multiple receivers can be placed anywhere on the person’s body. The system then uses the energy from the source to power multiple wearables on the user’s body using a technique known as body-coupled power transmission. In this manner, the user will only need to charge one device, and the rest of the gadgets that are worn can be powered up from that single source at the same time. Experiments by the team revealed that their system allows a single fully charged power source to power up to ten wearable devices on the body for more than ten hours.

The NUS team looked into harvesting energy from the environment as a backup source of power. Their research discovered that typical office and home environments contain parasitic electromagnetic (EM) waves that people are constantly exposed to, such as from a running laptop. The team’s novel receiver scavenges EM waves from the ambient environment, and the human body is able to harvest this energy to power the wearable devices, regardless of their location on the body, via a process known as body-coupled powering.

Assoc Prof Yoo commented on the advantages of his team’s method, saying, “Batteries are among the most expensive parts of wearable devices, and they add bulk to the design. Our innovative system has the potential to eliminate the need for batteries, allowing manufacturers to miniaturize devices while significantly lowering production costs. More excitingly, without the limitations of batteries, our research can enable next-generation wearable applications such as ECG patches, gaming accessories, and remote diagnostics.”

The NUS team will continue to improve the powering efficiency of their transmitter/receiver system in the hope that in the future, any given power-transmitting device, such as a user’s mobile phone or smartwatch, will be able to satisfy the network power demands of all other wearables on the body, allowing for longer battery life.

Best UFO Photo Ever Gets a High-Resolution Makeover