Home Other A Visit to the Buddhist Vihara 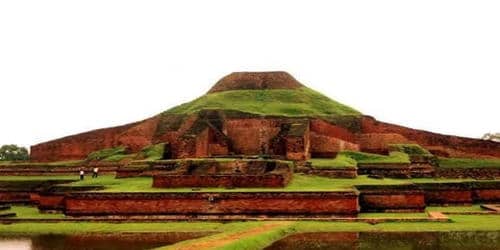 The Buddhist Vihara at Paharpur was founded in the 7th century. Evidence of the rise of Mahayana Buddhism in Bengal from the 7th century onwards, Somapura Mahavira, or the Great Monastery, was a renowned intellectual center until the 12th century. It is the largest single Buddhist monastery in the Indian Sub-continent and it is also known as the Somapura Mahavira, the great monastery. Its layout perfectly adapted to its religious function, this monastery-city represents a unique artistic achievement. It was a renowned intellectual center from the 7th century until the 17th century. Its layout is perfectly adapted to its religious spirit and theme. This monastery-city represents a unique artistic achievement that has influenced Buddhist architecture as far away as Cambodia. It was declared a World Heritage Site in 1985 on the 9th, session by the 21 members of international commitments.

Geographically located to the north-west of Bangladesh in the district of Naogaon, the heart-land of ancient “Varendra”, close to the village of Paharpur the extensive ruins of the Buddhist monastic complex are the most spectacular and important pre-Islamic monument in Bangladesh. We, the second-year students went on a visit to Paharpur last month. It was a study tour aimed to gain knowledge about the glorious past of our country. We were 50 (fifty) en professor of History. We hired a bus and started our journey at 8 a.m from our college Acsalsoncpiautse We took arrangements for lunch. At 8 a.m, immediately after our breakfast, we started ours. journey.

Accordingly, we started to round up the place. We were filled with wonder when we found the architectural design of the monastery. The surrounding area was so attractively decorated that we were really amazed. The dormitory buildings, for the teachers and students, the academic buildings, and the building for religious prayer and discussion really surprised us. Inside the buildings, we found some sculptures made of stones, and the inscriptions on the sculptures were not very distinct for which we could not read it. Besides the Vihara, we found a museum. We entered the museum. We could see so many things from which we got much important and valuable information. We found many coins at that time. We also observed many utensils made of mud and bronze which were used by the students and teachers of the Vihara. The earthen pots, crockeries, and the daily necessaries used by the residents of the Vihara simply charmed us.