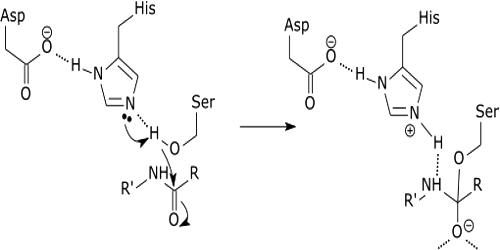 (a) Hydrolysis of sucrose by an acid in aqueous medium;

(b) Hydrolysis of an ester. e.g., methyl acetate, ethyl acetate etc. are catalyzed by acids. 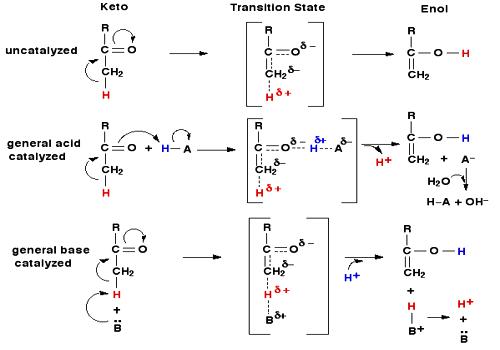 In such reactions the specific reaction rate is influenced by acid concentration or, more strictly speaking by the hydrogen son concentration. All the above reactions are first order processes. In some of the reactions not only the hydrogen ion but also the undissociated molecules of the acid act as catalysts.

Similarly, the rates of many reactions involving hydrolysis are enhanced by the OH– ion of the base. The decomposition of di-acetone alcohol by sodium hydroxide in aqueous solution is an example. The reaction follows first order kinetics. Hydrolysis of ethyl acetate by sodium hydroxide is, however, a second older process, the alkali reacting with the acetic acid formed to give sodium acetate.

In such reactions there are examples when the undissociated molecules also enhance the rate of reaction. Thus we have general base catalysis. In some reactions both acids and bases are found to catalyze the reactions. However, there are instances where only the acid (H+) or only the base (OH–) is effective. Acetal and sucrose are decomposed only by H+ ion. The hydrolysis of ethyl ortho carbonate is also catalyzed by H+ ion only. On the other hand, hydrolysis of diacetone alcohol and decomposition of nitramide are enhanced by the OH– ion or anions of weak acids. However, the effect of OH– ion predominates over any other effect. These actions are really specific catalysis.