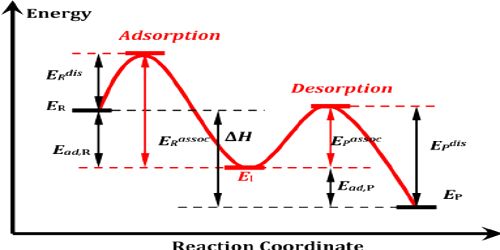 As per the transitional compound theory of catalysis, the reaction that is preferred is achieved with the structure of an intermediate compound and the subsequent decomposition of the similar into the preferred products. In this procedure, the catalyst is regenerated after the reaction is over. 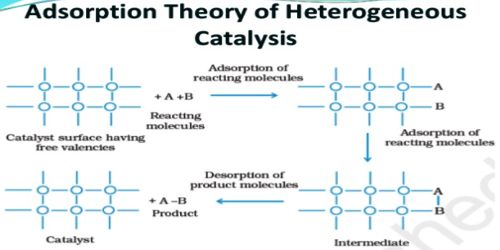 It is believed that the mechanism of heterogeneous catalysis on the surface of solid catalysts consists of five steps as follows:

Reactant molecules are first physically adsorbed on the surface. They then become chemisorbed. Bonds are formed as the reactant(s) are adsorbed onto the surface of the catalyst. These molecules then get adhered to the suitable sites available for adsorption. The capability for an atom or molecule to stick to the surface is known, radiantly, as the Sticking Co-efficient.

The chemisorbed molecules adjacent to each other react to produce the products. The reactants, when bound to the surface have a higher probability of reacting with each other, and after the reaction, they form an intermediate compound. Bonds form between the atoms and molecules on the exterior.