You are here: Home Biology Definition of Virus in Botany

The word virus comes from Latin. It means poison. In the old days, anything that used to cause disease was called a virus. The virus is known as an ultramicroscopic non-cellular disease creating a particle. It causes many diseases for both plants and animals. It is an infectious agent of tiny size and simple composition that can reproduce only in living cells of animals, plants, or bacteria. Viruses are too small to be seen under the light microscope (~65 nm). A virus has the following characteristics:

1. They are the smallest living organisms.

2. They do not have a cellular structure.

3. They can only reproduce by invading a living cell. Therefore they are all parasitic. They are obligate endoparasites, meaning that they can only live parasitically inside other cells. Most are causes of disease.

4. They have a simple structure, consisting of a small piece of nucleic acid, either DNA or RNA, surrounded by a protein or lipoprotein coat.

5. They are on the boundary between what we regard as living and non-living.

6. Each type of virus will recognize and infect only certain types of cells. In other words, viruses are highly specific to their hosts.

A virus is ultra microscopic and it can not be seen without an electron microscope. Usually, the size of viruses ranges from 20-300 (or 350 nm). Generally, the size of the virus varies from 12 millimicrons (polio) to 300 millimicrons (Tobacco Mosaic). The Potato mosaic and cattle pox are larger in size. The smallest virus is Coliphage F2 measuring about 2 nm.

Crystallized virus found to be of following shapes: Round, Rod Shaped, Tadpole shaped, Thread like Bread like Multiaxid, etc. The rod shape is due to the linear array of the nucleic acid and the protein subunits making up the capsid. The sphere shape is, in fact, a 20-sided polygon.

1. On the basis of the shape of the virus

3. On the basis of Nucleic acid: In its infective form, a complete virus particle that consists of DNA or RNA molecule enclosed in a coat of protein is called a virion. 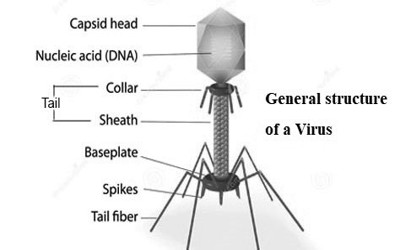 All viruses have a very simple nucleo-proteinaceous structure – which consists of a central core of genetic material either DNA or RNA (but not both). Some viruses are also enclosed by an envelope of fat and protein molecules.

1) In preparing antidotes/vaccine: Pox, mumps, polio, jaundice, etc., diseases can be controlled by penetrating living or dead viruses in the human body as vaccines.

3) Control of disease: T2 bacteriophage saves humans from dysentery by spoiling some harmful bacteria like E.coli

4) In the laboratory: They are used in the lab, as the simplest living model. In the research of genetics, the virus is used. It is an important subject in genetic engineering.

5) In the evidence of evolution: Virus plays a key role to acquire knowledge about the trend of evolution, and the process of formation of living organisms because they contain both living and non-living characteristics.