You are here: Home Biology Formation and Function of Lenticel

On the bark of woody plants, there are some lens-shaped or egg-shaped pores present called lenticels. It functions as a pore allowing for the interchange of gases between the interior tissue and the surrounding air. Lenticels are the pores of outer plant tissue that provide a direct exchange of gases between internal plant tissues and the atmosphere.

Lenticel is a body of cells shaped on the periderm of a stem, appearing on the surface of the plant as a lens-shaped spot, and serving as a pore. A lenticel is one of many raised pores in the stem of a woody plant that allows gas exchange between the atmosphere and the internal tissues. It allows the replace of gases between the outer environment and the internal tissue of the stem. 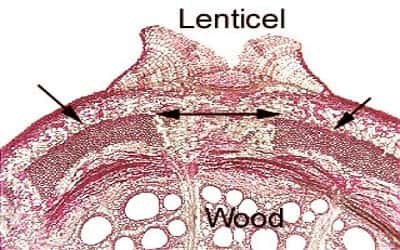 (i) For the convenience of gaseous exchange cork cambium, in different places, produces thin-walled round parenchymatous cells instead of cork tissue. Lenticels are also formed on some fruits e.g. the small dots on the surface of apples and pears are lenticels.

(ii) Due to the formation of parenchymatous cells, cell division occurs rapidly in them. Thus, the pressure falls on epidermal tissue and the epidermal cells rupture and forms lens-shaped pores.

(iv) Lenticels are characteristics of the woody stem. It is a tiny raised pore, typically elliptical in nature. They help in gaseous exchange and transpiration. It develops in woody stems when the epidermis is replaced by a cork (or bark).

(v) On the surface of the stem or root, the lenticels appear as raised circular, oval, or elongated areas that look like small eruptions in the bark. The complementary a cell is oval in shape and is thinly walled loosely arranged with large intercellular spaces. (ii) Often a little transpiration may occur through lenticels. The lenticels also help in transpiration called as the lenticular transpiration. It allows gas exchanges between the atmosphere and internal tissues of the plant.

(v) Lenticels are active during the night when stomatal transpiration stops. In plant bodies that produce secondary growth, lenticels promote the gas exchange of oxygen, carbon dioxide, and water vapor. It functions as a pore, providing a medium for the direct exchange of gases between the internal tissues and atmosphere.