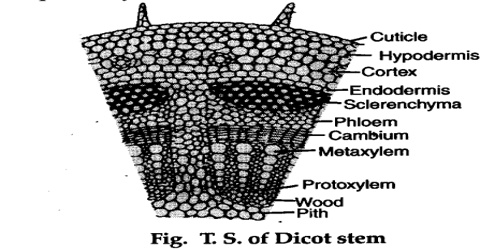 The internal structure of dicot stem

A plant whose seed contains two cotyledon or embryonic leaf is known as a dicot. This article briefly focuses on the characteristics and anatomy of the dicot stem. The microscopic structure of T.S. of sunflower (Helianthus annus) stem shows the following distinct regions: 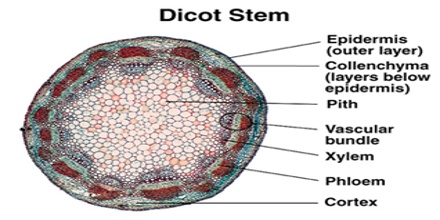 (i) Epidermis: Epidermis is the outermost single-layered covering of stem having no intercellular spaces. A thick cuticle layer is present on the outer surface of epidermis. The cells are living, barrel-shaped and compactly arranged without intercellular spaces and chloroplasts. It is covered by a cuticle to reduce transpiration. Multicellular hairs are also present. They may contain stomata for gaseous exchange. Several multicellular hairs and stomata are present in the epidermis. The epidermal multicellular stem hairs help in protection and heat loss. It is protective in function.

(ii) Cortex: Inner to the epidermis is cortex consisting of multilayered hypodermis and parenchymatous cortex to present automatic strength. Cortex is distinguished into three layers, such as- Hypodermis, general cortex, and endodermis.

(iii) Stele: The middle division of the stem inner to endodermis is known as stele. Stele includes pericycle, vascular bundles, pith (medulla) and pith rays (medullary rays). Pericycle occurs between the vascular bundle and endodermis. Pith is extensively developed and occupies the central portion of the ground tissue. It helps in the storage of food materials.

(v) Vascular bundles: Vascular bundles vary from 5-7 in numbers and are set in a ring. They are open and collateral. They are arranged in the form of a ring around the pith. Each bundle is composed of outer phloem and inner xylem on the same radius with a strip of cambium in between them. They are conjoint, collateral, endarch and open.

Cambium: Cambium is a thin strip of two or three-layered cells that are radically arranged. It lies between xylem and phloem.

Formation and Function of Bark