You are here: Home Business Studies How does the Managed Floating Exchange Rate System work?

A managed float exchange rate system is an international financial arrangement, whereby central banks intervene only periodically, not necessarily to support a country’s currency, but rather to stabilize volatile fluctuations in foreign exchange rates. Managed Float is a floating exchange rate in which a government intervenes at some frequency to change the direction of the float by buying or selling currencies. 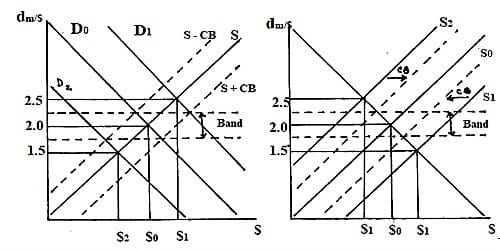 This policy evolved from the historical inclination of most nations to fix exchange rates, which was then countered with the theoretical benefits of unrestricted flexible exchange rates. But the government and/or central bank of a country may settle on to user involvement in the currency market as a way of manipulating its value to achieve given macroeconomic objectives

For example, an attempt to bring about a depreciation to

Overall, one key aim of managed floating currencies is to reduce the volatility of exchange rates. A floating exchange rate is determined in foreign exchange markets depending on demand and supply, and it generally fluctuates constantly. When a financial authority of a country allows the currency to float – that is allowing its exchange rate to move up or down depending on supply and demand in the foreign exchange market – but still intervenes in the market to make sure the exchange rate does not move beyond assumed official limits. This is because big fluctuations in the external value of a currency can increase investor risk and perhaps damage business confidence.