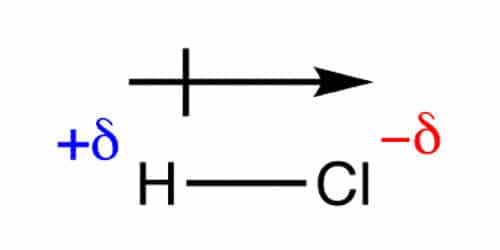 One of the most common examples is the water molecule, made up of one oxygen atom and two hydrogen atoms. The differences in electronegativity and lone electrons give oxygen a partial negative charge and each hydrogen a partial positive charge. The distance between the charge separation is also a deciding factor in the size of the dipole moment. The dipole moment is a measure of the polarity of the molecule.

As vectors have magnitude and direction, the first thing to decide is the direction of the dipole. The electric dipole moment (or just dipole moment) μ (mu) is modeled as two equal but opposite charges in a molecule Q and – Q multiplied by a distance d separating the partial charges.

It is a vector that points from the negative towards the positive end of the molecule. This is the internationally agreed sign convention. Some chemists use a non-standard arrow pointing towards the negative end to signify the movement of electrons and a cross at the positive end of the molecule. It should be made dear which system is being used, we will be using the “official” convention. The SI unit of dipole moment is the coulomb meter, which is much too large for use with molecules, so dipole moments are measured in debye (symbol D) where 1 D = 3.335641×103-30 C m.

The two bond dipole moment vectors A and B each have their own components which is most clearly shown by drawing parallel Cartesian axes for the “dotted” B vector as shown below Figure. Adding the two vectors gives us the molecule’s overall dipole vector C. 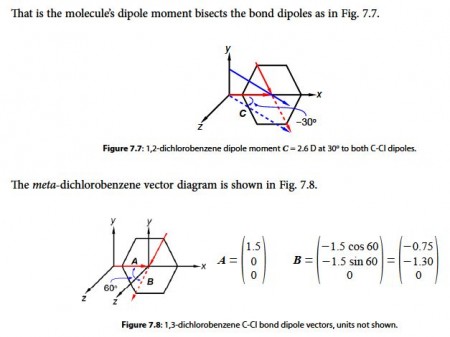 Adding the two vectors A and B gives us the molecule’s overall dipole vector C. 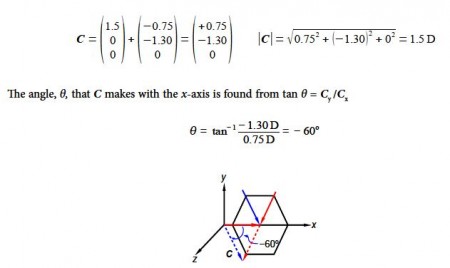 For para-dichlorobenzene the two bond dipole moment vectors are at 180° to one another and cancel out, adding the two vectors A and B gives us the molecule’s overall dipole vector C = 0 D. 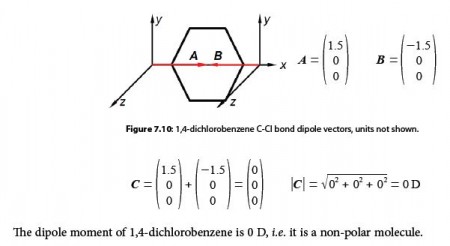