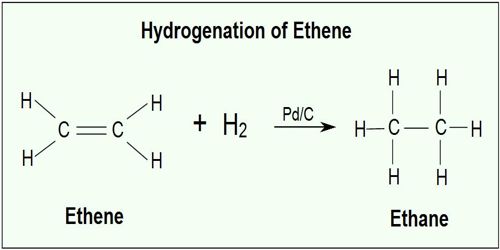 The five steps are illustrated in figure for the catalytic hydrogenation of ethylene to form ethane using finely divided nickel catalyst. 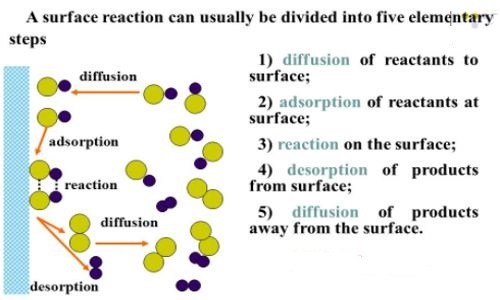 Both ethylene and hydrogen molecules diffuse (step i) to the catalyst surface and then gets adsorbed on the surface (step ii). The adsorption of hydrogen molecule results in gradual breaking of H – H and the formation of two M – H bonds where M is the metal surface (step iii). These are termed “surface compounds” which are unstable and highly reactive. Ethylene molecules are also chemisorbed to form “surface compounds”.

These should be oriented in a definite manner on the surface leaving a part of the molecule, i.e. atom or atoms of the molecule in a condition favorable to the reaction. If the M – H bond is relatively weak the hydrogen atoms may move about on the metal surface. What they encounter an ethylene molecule the hydrogen atoms may become bound to the carbon atoms (step iv) forming the ethane molecule. The ethane molecule is now released from the metal surface and diffuses away from the surface (step v). The active site is now ready to adsorb fresh molecules of the reactants.