These observations have been utilized for the determination of the critical constants. Critical pressure and temperature may be determined fairly easily by using an apparatus as shown in the figure; similar to Caignard de La Tour’s apparatus. 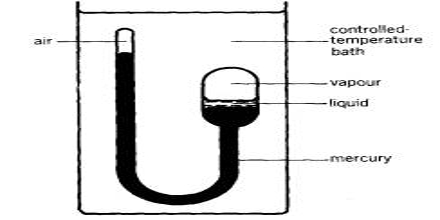 It consists of a thick-walled glass U-tube one limb of which is longer than the other. The liquid is contained in the bulb and the rest of the apparatus is filled with mercury and the upper and of the bulb is preserved leaving a little air in it. The shorter end containing the liquid in contact with its saturated vapor is sealed and is surrounded by a heating jacket. The other limb of the U-tube, which serves as a manometer, has aired at its upper-end A, the rest of the tube being filled with mercury.

The temperature of the bulb is raised gradually. The end B is gradually heated by passing hot air or vapor through the jacket and the temperature at which the meniscus separating liquid and vapor just disappears and at which it reappears on cooling is noted. On cooling this mixture, a mist first forms and the liquid appear quickly. The average of the two is the critical temperature. The volume of the air in the limb A is also noted at this temperature and the critical pressure is calculated from this. The critical temperature, (Tc), is characteristic of every gas and might be defined as: “The temperature beneath which the constant enlarge of pressure on gas ultimately brings about liquefaction and above which no liquefaction can take place no issue what so ever pressure be applied”.

Use of Freezing Mixtures in Attaining Low Temperature