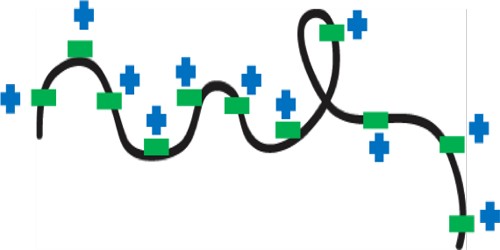 This method is based on the measurement of change in the concentration of the electrolyte in the neighborhood of the cathode and the anode as a result of the passage of electricity. The form of the apparatus usually used in the laboratory for the purpose is shown in Figure. It consists of three parts which can be separated from one another by means of the stop-cocks SS. 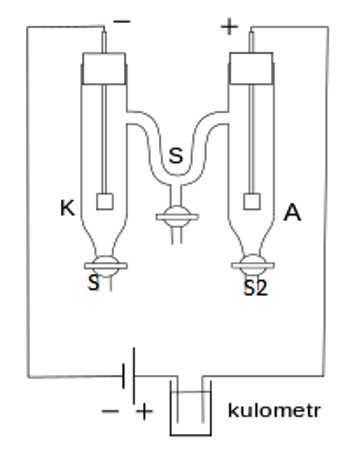 The parts can be named the cathode chamber, the anode chamber, and the middle chamber. The chambers are provided near the bottom with stop-cock S1, S2, S3, through which liquids can be drained off. Electrodes are inserted into the cathode and anode chambers. The electrodes are connected to a d-c supply source B, through a variable resistance R, a millimeter mA and a Copper of silver coulometer (not shown in the Figure). The latter is for measuring the quantity of electricity passed. The method of measurements may be illustrated by the determination of transport number of silver and nitrate ions. In this case the electrodes consist of stout silver wires.

The transport number tube is filled with a dilute AgNO4 solution of exactly known concentration (0.1— 0.05 mol L-1). All air bubbles are carefully removed. A small current (10-20 mA) is passed through the solution for a known period, say two hours. Any fluctuation in the millimeter reading is adjusted by the variable resistance R to maintain steady value of the current. From the time and the current the total quantity of electricity in Coulomb passed through the solution is calculated. This is checked with the coulometer in the circuit. As a result of passing the current electrolysis takes place, Ag is deposited on the cathode and dissolved in the anode.

However, due to migration of ions, the concentration of the solution in the anode chamber and in the cathode chamber has changed but that in the middle chamber remains unchanged (Figure). Immediately after stopping the current the stop-cocks SS are closed to prevent diffusion. The solutions from the anode and the cathode chambers are separately taken out by opening stopcocks, S1 and S2. These solutions arc separately weighed in two different bottles and analyzed for silver content usually by titrating against standard NH4SCN solution with ferric alum as indicator. Since the initial concentration of the AgNO3 is known the fall in concentration in cathode an anode chambers are calculated.